Heyhey! I found this letter on your porch.

Shandi the Dog is an original character created by Pumpituppartyzone. She is a Yellow Lab that is 93 cm tall and keeps her weight secret.

Shandi was born in O'Fallon, Missouri. She grew up there and was very popular in school. She got a British Accent from her mum, who is fully British. Her father is Egyptian but was raised in England. He made them move to Mobius in the city Blast Town because his job moved. She is still pretty popular at school and has a bad past with roaches and spiders.

Shandi was named after the previous hostess of Lingo, Shandi Finnessey. Since she and Pumpituppartyzone are both from Missouri, he decided to make Shandi from Missouri aswell. Pumpituppartyzone came up with the idea for Shandi in many different ways. He wanted to make a British character, but also a smart character with frequent blonde moments. The design for her hoodie and shoes are from a hoodie and shoes in the game Fusionfall.

Shandi is a pretty preppy person. She is very popular at school, but still very nice. She frequently has blonde moments, which she is known for. She can be very smart, however, and loves to solve mysteries. Her friends describe her as a "smart airhead," which she is always sensetive about. She loves bowling and is very into Egyptian Mythology and Hyroglyphics. 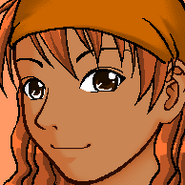 Shandi in anime. Made at http://foxrichards.deviantart.com/art/FaceMaker-52755515 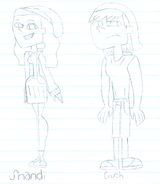 A sketch of Shandi and Crush in human form
Add a photo to this gallery
Retrieved from "https://sonicfanon.fandom.com/wiki/Shandi_the_Dog?oldid=1824055"
Community content is available under CC-BY-SA unless otherwise noted.