THIS PAGE IS ABOUT THE CHARACTER THAT APPEARS IN SONIC BOOM! 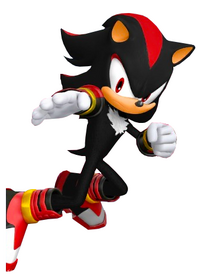 This version of Shadow the Hedgehog is the incarnation that appears in the Sonic Boom subseries as a minor antagonist. He appears as a minor antagonist in The Legend of Fox the Brave in the stories The Return of Sonic.EXE and The War of Time. He is also responsible for the deaths of both Flare the Charizard and Ember the Fox.

Shadow is a somewhat short hedgehog with jet-black fur and red streaks on his quills and head. He has a patch of white fur on his chest, a tan muzzle, short black nose, and bright red eyes. Like his main series counterpart, Shadow wears rocket skates, and has a single golden ring visible around each wrist(though smaller and less obvious than on his main series counterpart).

In The Legend of Fox the Brave, Shadow is depicted as rather snide and harsh. Whenever he is interacting with Fox, he is incredibly mocking, condescending, and extremely arrogant, taking every opportunity to taunt and bully the fiery-tempered fox. It was confirmed by the author that he hates Fox as much as the fierce-tempered leader hates him.

Shadow's past is unknown, but most likely the same as in the video games.

The Return of Sonic.EXE: Shadow first appears when Fox nearly crashes into him. He taunts Fox, who snarls at him. When Shadow mocks Fox's memory of his deceased father Torch, Fox gets up(having been shoved down), and shoves past him, angry.

The War of Time(story): When Fox is at the river, getting a drink while trying to shake off a nightmare of Mephiles, Shadow appears, mocking Fox. Thoroughly angered, Fox attacks him, and at first has the upper hand, however, Shadow fights back. He whales relentlessly on Fox, severely injuring him before he is chased off by Roy and Liam.

Like his main series counterpart, Shadow can use Chaos energy for various reasons, often for attacks. His confirmed attacks are Chaos Blast and Chaos Spear. He is also capable of teleportation via his Chaos powers and natural super-speed to rival that of Sonic and maybe even Fire Fox.

Shadow has natural super speed that easily rivals that of Sonic the Hedgehog.

Shadow's weaknesses are unknown, but it is possible that his over-inflated ego and extreme arrogance can be his undoing.

Retrieved from "https://sonicfanon.fandom.com/wiki/Shadow_the_Hedgehog_(Sonic_Boom;_Burpy%27s_Dream)?oldid=1800067"
Community content is available under CC-BY-SA unless otherwise noted.