You may be looking for his Prime Zone or Sonic Boom counterparts.

Your Four Worlds are no different from mine. I will bring them into order soon enough, and your warriors will pay for your arrogance and stupidity.

— Shadow's vow to the warriors in Lamarkie Village, Shadow of Time 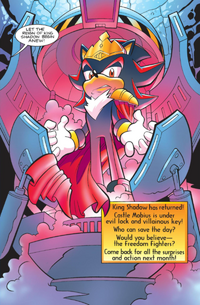 For the most part, King Shadow has the exact same appearance as his Prime Zone(Archie) counterpart, but wears a crown and cape. As of Shadow of Time, Shadow has three scars on his muzzle from a fight with Boulder the Lycanroc.

Shadowed Future: Shadow destroys the warriors with help from his "Dark Presence"(reworked Dark Legion) when he drives the warriors from the Storming Base, forcing them to flee to a forest outside Portal on Angel Island, Shadow's new capital. Afterward, Shadow conquers the Four Worlds of his Zone and exerts a regime of fear and cruelty over his subjects, making the warriors fugitives, and murdering both Fox the Brave and Austin Smith when they try to fight back(Fox is shot through the chest with a Chaos Spear, Austin's chest is crushed by a single kick). He later tries to capture an Arctic fox cub named Flynn when Braveheart take him in, but the two foxes slip away. In the final battle, Shadow is defeated by Lara-Su while the warriors fight the Dark Legion, and is imprisoned.

Shadowed Future: 5 Years Later: Shadow first appears in a nightmare Braveheart has about King Sonic's Five Years of Peace Speech, in which Braveheart himself is murdered by Shadow as retribution for his past defeat. Shadow is later freed by Lien-Da after she has Braveheart's son Scrap kidnapped. Shadow heads for the trapped monster Tikhaos with Lien-Da and a terrified Scrap, but vanishes after releasing her.

Shadow of Time: Shadow will return as the main antagonist of this upcoming story. This time, he will be in the Prime Zone universe, and will threatening the warriors after harassing the Wandering Wolf Pack.

Like his other counterparts, Shadow has Chaos powers, able to use Chaos Control and teleportation, as well as using Chaos Spears as a weapon.

Shadow has super speed, and is surprisingly skilled in combat, able to hold his own against warriors who are much bigger and bulkier than he is.

Unknown, though it's possible his arrogance means that he often underestimates his enemies. Because he so blatantly disrespects the warriors and apparently does not understand the warriors' tight bonds, he commonly underestimates them, meaning he is more easily defeated by them.

Shadow and Braveheart strongly hate each other, as Shadow ruthlessly murdered Braveheart's father Fox, and Shadow views Braveheart as too much like his father.

Because of his murder of the Fox the Brave of his own World, Shadow has little to no respect for the Fox the Brave of the Prime Zone Universe, which Fox views as the perfect opportunity to unleash all his hatred for the black hedgehog, which he'd had to hold back after Shadow's Prime Zone counterpart was pardoned and made an honorary warrior.

Because of his murder of the Austin Smith of his own World, Shadow disrespected Austin in the Prime Zone, making the warrior's short temper flare up and give the "king" a verbal lashing.

Shadow showed some respect to the Wandering Wolf leader, though this faded a bit when he discovered the young Wanderer Arrow was blind.

This Shadow is the only Light Mobius character to interact with characters outside his Zone.

Retrieved from "https://sonicfanon.fandom.com/wiki/Shadow_the_Hedgehog_(Light_Mobius;_Burpy%27s_Dream)?oldid=1812408"
Community content is available under CC-BY-SA unless otherwise noted.