Start a Wiki
This is an article about Shadow the Hedgehog (Crimson Flame Continuity), a character created by CrimsonFlame2K on 09/9/2018.

CrimsonFlame2K, the author of Shadow the Hedgehog (Crimson Flame Continuity), considers this page to be unfinished. As such, some sections may change. 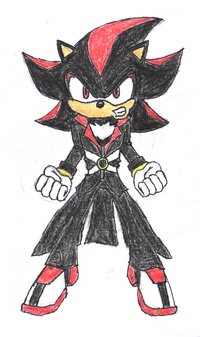 I won’t allow those bastards to create any more monsters like me!

— Shadow on the Genesis Corporation, Clash of Mythics: Genesis

Life on Earth has gotten a lot better since those days... I just wish you could live that kind of life too, Maria.

— Shadow reminiscing on the past, Shadow: Stage 2 - The Darkness
Though he'll save his mercy for those who need it more, there’s no shadow of a doubt that Shadow the Hedgehog - often touted as the Ultimate Life Form - will always stand up for the greater good no matter the cost. He appears as one of the playable characters in the Clash of Mythics series, starting with Clash of Mythics: Genesis, the first installment of the series.

He also appears as an antagonist in the Sonic Forces fanfic adaptation, Rage Against the Empire, where he initially seemed to be working for the Eggman Empire when he suddenly showed up during Eggman's sudden attack on Central City. However, he is soon revealed to have not been on the mad doctor's side to begin with.

Meanwhile, he also appears as one of the protagonists of Flames of Fate and Destined Dark, an adaptation of Sonic the Hedgehog (2006) in which he is sent to Soleanna in order to rescue Rouge, who herself was sent in to retrieve an artifact known as the "Dark Grimoire", but soon finds that there is more to the tome than meets the eye in the form of a new threat.

Shadow is a Mobian hedgehog standing at four feet, ten inches, making him one of the shortest characters in the entire roster. Much of his fur is a pitch black in coloration, with bright red stripes that stand out quite noticeably from the rest of his person on his spines, limbs, and around his eyes, and a dark tan skin tone on his muzzle and inner ears.

Shadow's attire consists of his usual pair of white gloves with black cuffs and red tongue accents, with his iconic Inhibitor Rings worn on each wrist, a dark grey buttoned-up low-cut longcoat with red accents and the GUN insignia emblazoned on both shoulders of its sleeves, and a pair of dark grey military pants. He also sports a newer and shinier pair of his iconic Air Shoes, a pair of shoes outfitted with hover jets as well as black cuffs with red tongue accents as well as a second set of golden rings around the ankle area.

Most might see Shadow as being an aloof and somewhat unapproachable loner, as well as proud and confident in his own capabilities to a fault. He is also known for being rather ruthless in battle with almost no objections towards extreme violence, especially towards those who are against him. However, he has been called out on this on occasion, particularly by his old friend and rival, Sonic, and fellow GUN soldier, Whirlwind.

All the while, much like his blue-furred counterpart, Shadow is incredibly confident in his abilities to a fault and will occasionally boast about his power. He also had a habit of belittling many of the people he has fought in the past. However, one instance of this would soon bite him - let alone the entire world - in the ass in the form of Infinite, the now-deceased prime soldier of the Eggman Empire. After realizing what his actions had wrought, he has resolved to dial down his arrogance in order to avoid such disasters from occurring on his account. Despite that, he is still unafraid of expressing his thoughts, regardless of the response, and is never one to bluff; that is, whenever he sets his sight on something, he will go to the ends of the earth to see it through.

Meanwhile, Shadow has notable lack of regard for silliness and often keeps a straight face in almost any situation, making him what many would call a “comically serious” character. In the event that he is present in any situation where others would be laughing their asses off, expect the black hedgehog to be either indifferent or treat it as seriously as he would any other.

Despite all of this, he does have a soft spot and cares very much for his closest allies, in particular Rouge and Omega, though he tries incredibly hard to hide it. Seeing any one of them in absolute danger, or gravely injured, may cause him to go into an incredibly-restrained tranquil fury - and that’s only in the best case scenario - where he will not stop until the threat is positively, absolutely dealt with. In that sense, you can always count on him to do the right thing, even if he won’t necessarily be friendly about it.

Like Sonic, Shadow possesses an incredible amount of speed and strength, though his physical power easily exceeds the Blue Blur's own. He also a hell of a lot tougher in comparison to Sonic, and is able to survive things that would kill others outright (aside from falling from a great height, which Sonic has survived several times). As well, he is immune to disease and does not physically age, so even though he is chronologically well into old age, he still has the body of a young adult in his prime. He also sports incredible levels of agility and dexterity, performing awe-inspiring stunts and maneuvers with minimal effort.

Shadow also possesses the ability to manipulate Chaos Energy, with his most common techniques using this power including his Chaos Spear, a bolt made of raw Chaos Energy with solid range, and the highly-versatile Chaos Control, which allows him to warp through time and space and - in rare occasions - slow down or even completely stop time, and the Chaos Slash, where he strikes the opponent with a blade made of raw Chaos Energy. Due to having gained improved control over his power, he can now unleash not one, but two toned-down versions of the much-dreaded Chaos Blast, the first dubbed the Chaos Blast ver.β, in which he creates a sphere of Chaos Energy that causes a large explosion, and the Chaos Blast ver.α, where he fires off a devastating beam of Chaos Energy towards everything in front of him.

In addition, he can access two transformations: his super form, dubbed Super Shadow, which grants him a massive surge of power as well as nigh-invulnerability, the ability to fly, and strength and speed that is enhanced to a significant extent, and a completely different and relatively less stable form, which is activated by removing his Inhibitor Rings, turning him into a living dynamo of raw Chaos Energy.

He also possesses an incredibly strong sense of identity and belief that he is his own being, which allows him to be generally impervious to many manipulation attempts and is not so easily tricked into doing something he may wholeheartedly regret, even if he may not show it.

Though Shadow is incredibly powerful, he does have weaknesses that can be exploited. Though mostly present in dire situations, his pride and stubborn nature can prove to be a major detriment, for he can sometimes grate on others' nerves. In addition, his brutal honesty and aloofness can make it hard to communicate with him on occasion.

Shadow also sports a very small degree of mental instability, as his memory sometimes suffers a brief relapse when especially stressed out, meaning he can forget even the simplest of things, such as his location, for a short moment. He also sometimes suffers from a slight depressive episode in especially bad days, sometimes to the point of doling out violent threats to anyone who speaks to him then.

He also seems to have a violent temper that, while not really easy to trigger, can be quite devastating at times. However, his anger comes at a cost, for his blind rage means he can be taken advantage of due to not noticing things while berserk.

Though it doesn't happen often, Shadow can indeed wear himself out or even lose control of himself if he pushes too far with the usage of his powers, such as when he leaves time frozen via Chaos Control for an extended amount of time or when he removes his Inhibitor Rings and leaves his full power unleashed for too long.

Retrieved from "https://sonicfanon.fandom.com/wiki/Shadow_the_Hedgehog_(Crimson_Flame_Continuity)?oldid=1868560"
Community content is available under CC-BY-SA unless otherwise noted.