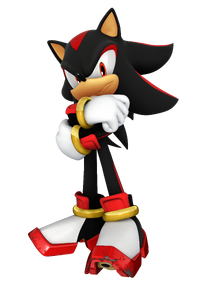 Chaos Emeralds, defending humanity
Dislikes
Sonic (not all the time),

anyone who thinks they're better than him,

being mistaken for Sonic

Amy Rose, Rouge the Bat, Cream the Rabbit (sort of),

Mercy is for the weak! Evil in all its forms must die!

Shadow the Hedgehog is an artificially-created hedgehog, billed as "The Ultimate Life Form". He does not serve with the Knothole Freedom Fighters, although he has sided with them on many occasions. Otherwise, he works behind the scenes, chipping away at the evil forces of the Eggman Empire and any other entities that pose a significant threat to the planet. Mostly, he's no different from the official Ultimate Life Form. For a bunch of other fakers, go here.

Shadow's backstory is exactly the same. One minor note, though: Due to the backstory of this universe, Maria's & Professor Gerald's last name may be "Kintobor" instead of "Robotnik".

For the most part, Shadow has the same cold, brooding personality as the official canon. However, in this universe, he is a bit more arrogant. He also seems to be a bit more mentally unstable (although is this really possible with Shadow?). Additionally, he's somewhat more aggressive, especially towards Sonic, even threatening to kill him once. However, he has also had moments where he seemed to be in a good mood.

No changes. He did, however, wear a Gestapo cap in "Two Kinds of Heroes"

Shadow retains all of his abilities in this universe, and he has a couple of new ones: Mechanical skills & piano playing

Shadow has an arsenal of firearms at his disposal: His main sidearm is a Walther P-38, which he received in "Two Kinds of Heroes". For extra firepower, he carries a customized Smith & Wesson Model 29, which has walnut grips with the Black Arms emblem etched in them & Maria's name engraved on the barrel. He also has a Heckler & Koch MP5 in case he needs full-auto capability. At one point, he even owned a customized Colt Python, but he gave it to Sonic for unknown reasons. He also carries different types of ammunition with him, including special armor-piercing bullets for robots.

In this story, Shadow somehow makes his way to Hammelburg, Germany. Here, he joins the Gestapo after being duped into believing that they were part of a "Master Race". As a result, he becomes chief security officer for Stalag 13 and gets along poorly with the rest of Klink's staff. When Shadow & Sonic first encounter each other here, Klink warns the two hedgehogs that personal vendettas won't be tolerated in Stalag 13. Nevertheless, Shadow takes it upon himself to warn Sonic not to try anything funny or he'll kill him. Despite his commitment to his job, Shadow starts questioning whether he's doing the right thing.

Later, Antoine confronts Shadow and orders him to surrender. However, the Ultimate Life Form is undeterred and throws him out of Klink's office. In a further attempt to get on his good side, LeBeau brings him a tray of apple strudel. Shadow confiscates them and threatens to break LeBeau's neck. While no one is looking, though, he takes one and eats it. He loves the taste, and makes it his new favorite food.

That night, when Sonic & some other Heroes break out, Shadow conducts a surprise inspection. When he sees that Sonic is missing, he blames it on Sally and hits her a few times. However, he is interrupted when a group of Cylon Centurions invades the barracks. After helping Knuckles & Rouge take them down, Shadow has a change of heart and quits the Gestapo. However, he keeps the Walther P-38 that he was issued as a sidearm.

Having escaped back to Mobius somehow, Shadow collides with Sonic. He gets mad at Sonic and chases him to the outskirts of Eggopolis, losing the Blue Blur at a junkyard. Though Shadow has given up for now, he still has a bone to pick with Sonic. He encounters Antoine & Rotor, who are also looking for Sonic. Antoine freaks out, but Shadow assures him that he's no longer with the Gestapo. Rouge is also present during this meeting. The next day, Shadow encounters Sonic (actually an impostor) and gets sprayed with sleeping gas. When he wakes up, he finds out that the impostor doodled all over his face, which makes him really mad. While searching for Sonic, he encounters Antoine & Bunnie, but neither of them know where the Blue Blur is.

Eventually, Shadow finds the impostor Sonic again. Seeing that he’s kidnapped Cheese, the Ultimate Life Form kills him with a Chaos Spear and tries to free Cheese. However, the impostor has recovered and become stronger, so Shadow engages him in a fierce battle. Despite wielding a .44 Magnum, Shadow is almost killed during the battle. In fact, he finally manages to defeat the impostor with the assistance of Silver and gives Cheese back to Cream. He asks Cream & Vanilla if they have any apple strudel, to which they reply negatively. Afterwards, he tells Silver to go away.

With one impostor defeated, Shadow uses his .44 Magnum to gun down the other one. However, this one also recovers, turning into a mad fire-breathing dragon. At this point, Blaze shows up and helps Shadow to defeat the dragon, in addition to destroying a bunch of stealthbots. In the end, Shadow confronts Sonic, thinking that he’s responsible for all the wrongs that the impostor committed.

Shadow is having a philosophical discussion with Sonic about mercy when Sally alerts Sonic to a distress signal at Kinto Village. When the Blue Blur responds, Shadow races him over there. However, it turns out to be a trap set by Dr. Robotnik. The two hedgehogs battle his forces, but Sonic steps on a spike and hurts his foot. Rather than helping him out, though, Shadow leaves him behind and chooses to pursue Robotnik's forces instead.

While Sonic is suffering from the effects of sodium barboxide poisoning, Shadow is fighting Robotnik's badniks in order to draw them away from the Atomic Decoupler, Robotnik's newest superweapon. He also appears in some of Sonic's dreams. In his most notable moment, Shadow appears as an NYPD officer who confronts a wounded Sonic. In a repeat of Dirty Harry, he "kills" Sonic with a .44 Magnum. In the real world, once Sonic recovers, Shadow encounters the Freedom Fighters outside of Robotnik's HQ and chides them for spending time helping Sonic. Nevertheless, he helps them by distracting Robotnik's forces, allowing them to destroy the Atomic Decoupler.

Shadow also appears in the "Sonic Says" segment, where he calls Antoine "ugly" and tells him that he should die, causing him to cry.

Like most of Sonic's friends, Shadow is a big fan of Super Changin' Muscle Rangers. He's probably the biggest fan of the show, too, because he refers to his favorite character – Walt Zacharias, the black Muscle Ranger – as being like a brother. He also calls the show a "glorious epiphany" and gets very mad at Sonic for badmouthing the show. When Shadow encounters Sonic later on, he gets into a fight with him regarding the show, but he stops fighting when Ol' Blue tells him that the Muscle Rangers stars were kidnapped. Using Chaos Control, he catches up with Rouge.

Shadow & Rouge go on a mission to rescue their beloved stars, where they are joined by Amy & Antoine. The operation appears to be going well at first. Unfortunately, Shadow is hit by a stun bolt and knocked out, and the group is captured. Luckily, Sonic & the rest of the gang show up to rescue them & the Muscle Rangers stars. After the rescue, Shadow expresses his gratitude to Manny Taylor, the actor who plays Walt, even going so far to refer to him by his character's name. Manny tells him that it’s only a TV show, causing Shadow to feel betrayed. Feeling that his favorite show was "ruined', he blames the whole thing on Sonic.

In the "Sonic Says" segment, Shadow is Tails' partner for a science project. He gets annoyed when Sonic delays Tails for this segment.

Shadow uses Chaos Control to teleport into Robotnik's lair. He expresses his gratitude to the Doctor for releasing him from Prison Island and gives him hotcakes for a gift. Of course, just like everyone else, he is rudely attacked by Robotnik's minions. However, he manages to escape using Chaos Control. Later, he saves Cream & Cheese from Robotnik's minions.

Shadow also appears in the "Sonic Says" segment, where he gets mad at Sonic because he got Sonic '06 for Xbox 360 as a Christmas present. As a result, he chases after Sonic.

Shadow breaks into the home of Gray the Hedgehog, an ordinary hedgehog who works for a living. The reason he broke in was because he had begun to question the promise he made to Maria. He also questions whether Gray is living life to the fullest. After Shadow tells his life story to Gray, he chews him out for having all the amenities of modern life and not being grateful for it. Thus, Shadow has one demand for Gray: Live each day as if it were his last. Also, he asks him to spare a thought for Maria. With that, Shadow runs off into the night.

Shadow is now a student at Daniel Griffith High School in Station Square. On the first day of the story, he intentionally drops a soda can and demands that Sonic pick it up. He gets mad when Sonic chucks the can at him instead and is about to beat him up when Principal Silvestri arrives. Shadow lets Sonic go for now, but the next day, when Sonic bumps into him and causes him to drop all his books, Shadow hits him. As a result, Principal Silvestri gives Shadow a week's suspension.

Retrieved from "https://sonicfanon.fandom.com/wiki/Shadow_the_Hedgehog_(BearfootTruck%27s_Universe)?oldid=1361573"
Community content is available under CC-BY-SA unless otherwise noted.