""I had a family, and Eggman took that away from me!" he swiped at Shadow, but missed. "And you think you're the only one?" Shadow's tone was odd to Red, and he stopped, allowing Shadow to yank him off his paws."
—Shadow and Red, Red's Regret

THIS PAGE IS ABOUT THE CHARACTER THAT APPEARS IN THE ARCHIE COMICS! 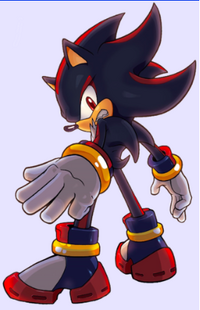 This version of Shadow the Hedgehog is the incarnation that appears in the Archie Comics(Pre-Super Genesis Wave), and in The Legend of Fox the Brave. He is a rather complicated person known for helping Eggman in the past and preventing a young Red the Fox from escaping Eggman in his youth.

Shadow is a somewhat short hedgehog with jet black fur and red streaks on his quills, head, arms, and legs. He has a patch of white fur on his chest, a tan muzzle, and bright red eyes. He wears white gloves, red and white rocket skates, and has one gold ring around each wrist and ankle(his inhibitor rings).

Shadow is a rather complicated person. Commonly expressionless, Shadow is stoic, if a bit misguided sometimes. Just after his release during the events of Sonic Adventure 2 and Red's Regret, Shadow became loyal only to Eggman out of determination to avenge what he perceived to be the stupidity of humanity and the death of his close friend Maria. He also appears to harbor a dislike of Fox the Brave, who outright hates him in return. As of The Phantom Storm(the story arc), Shadow seems to have garnered a grudging respect for the warriors(even going out of his way to rescue a drowning Boulder), and is willing to help them, despite their distrust and Fox's hatred.

Before the Series: Unknown, but likely the same as in both the comics and video games.

Red's Regret: Shadow first appears when Eggman releases him on Prison Island. Eggman's helper, a young red fox cub named Red, becomes extremely nervous around Shadow, and even tries to flee at one point. However, Shadow intervenes and literally drags the fuming cub back to Eggman, who reprimands him. Red continues to try to escape, but each time is stopped by Shadow until Sonic manages to stop Eggman, taking the young cub with him when he leaves for Earth after stopping the doctor.

The War of Time (story): Shadow is given a brief mention when Fox has his first nightmare of Mephiles. He is mentioned to be shaped exactly like Shadow.

The Dusk Wolf: Shadow is mentioned when Boulder first encounters Mephiles. The young Lycanroc thinks to himself that while this stranger looked like Shadow, he certainly didn't sound like him.

Shadows of Vengeance: Shadow first appears when Boulder the Lycanroc, Austin Smith, and Dawn the Lycanroc are traveling through the City of Soleanna and Boulder has a vision of where Shadow was. The young Lycanroc leads his companions over to him, and tells him that they need his help. Boulder explains their mission to defeat Mephiles, and-after some convincing-Shadow joins them. Later, during the battle in Dusty Desert, when Austin and Boulder are using Continental Crush, Shadow uses Chaos Control to give Boulder a boost to his Z-Move, thus allowing him to beat Mephiles once and for all, though it drains the young Lycanroc of his energy. Shadow later leaves before the warriors arrive at The Storming Base, deciding that it's not worth riling Fox up, though the big fox gives him credit for helping defeat Mephiles despite his hatred of the hedgehog.

The Heart of a Warrior: Shadow first appears when he pulls a drowning Boulder from the river. When the drenched Lycanroc tries to head back to camp, Shadow questions him, and insists on coming along. When the two arrive at the camp, Shadow ignores the hostile looks everyone gives him. He is allowed to stay as thanks for bringing Boulder back, and later accepted as a warrior as thanks for rescuing Sunny and Pebble when the leaders return. Shadow is among the warriors captured by Eggman's forces, and later released when Pebble evolves while fighting Infinite. Shadow later participates in the final battle, and after it is won, Austin gives him an official pardon, and full rights as a warrior, though he is no longer a Storm Fighter.

The Storm of Evil: Shadow does not formally appear, but a clone of him is used in the Prologue. It first appears after Stan the Wolf discovers the Resistance members Infinite ruthlessly murdered, when it jumps in front of him. He angrily questions it(unaware it's a fake Shadow), but is cut off when Metal Sonic, Chaos, and Zavok(all clones) all appear and chase him away. The clones are used to corner Stan while Infinite has his "fun" with the distraught Wolf.

A Loner's Tale: Shadow formally appears only once, but a clone of him is used at various points. In the Prologue, while Infinite has Pixie the Dog surrounded, her older brother Digger comes to her rescue and punches the Shadow clone in the face. When the Dog is distracted, he is punched by the Zavok clone, and the Shadow and Chaos clones join in, beating Digger into unconsciousness. When Digger wakes up, he is held by Shadow with his arms behind his back. Shadow himself is later seen among the Storm Fighters while they are sneaking through Red Gate City, which unnerves Digger. Later, while they are escaping Infinite in Red Gate, a Shadow clone knocks Digger to the ground and grabs Pixie. Digger punches it and frees his sister, and they flee.

Rise of a Team: Shadow himself does not appear, but a clone of him is used in a memory Monty the Dog relives while he is in a coma in the wake of a cruel beating received from Infinite. In Monty's house in Mountain Lake Village, a Metal Sonic clone grabs Monty's father Thomas, while a Zavok clone grabs his mother Erin, and a Shadow clone grabs a young Monty, and the entire family is dragged out while Eggman tries to force the village leader Mel the Wolf to surrender. The clone holds Monty while he struggles, and later shoves him toward the crowd of villagers when Eggman orders their destruction, though Monty escapes to Wolfhart City.

Shadow is able to use Chaos energy for various needs. His confirmed moves are Chaos Spear, Chaos Blast, and Chaos Control. He is able to use his Super Shadow transformation if he has access to the seven Chaos Emeralds. Shadow also appears to be able to somehow transfer the effects of his Chaos Control to others, as he uses this to give Boulder a boost while the Lycanroc is using Continental Crush.

Shadow has super-speed easily rivaling that of Sonic the Hedgehog.

Unknown. It's possible that Shadow cannot easily handle enemies that are large and fast at the same time(like Fox, who is easily a few feet taller and is quite bulky).

Retrieved from "https://sonicfanon.fandom.com/wiki/Shadow_the_Hedgehog_(Archie;_Burpy%27s_Dream)?oldid=1800064"
Community content is available under CC-BY-SA unless otherwise noted.