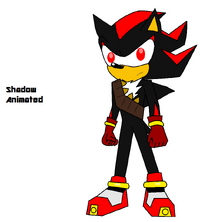 Shadow the Hedgehog is one of the main characters in the fan Sonic Animated series. He is voiced by Kirk Thornton

He is almost the same in appearance but lacks streaks on his feets, more red on his boots and darkred gloves. He also happens to have a ammobelt.

He seems to be gruff and shorttempered due to witnessing his friend Maria's death. As a promise he swears to protect his friends. He often talk about his past.

He has similar powers to Sonic's, but more advanced ones, for an example he uses chaos powers and teleportion, super strength.

• His personality is based on Walter Sobchak.

Retrieved from "https://sonicfanon.fandom.com/wiki/Shadow_the_Hedgehog_(Animated)?oldid=1800062"
Community content is available under CC-BY-SA unless otherwise noted.