Start a Wiki
This is an article about Shadow the Hedgehog/Mobius Redrawn, a character created by Konnichiku on 07/23/2015.

"And so I witness the fall of Mobius from its peaceful state into a world I can shape to my liking."
—Shadow the Hedgehog 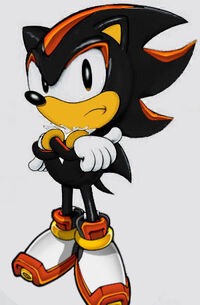 Shadow the Hedgehog is a tyrant black hedgehog who took over the Eggman Empire and tried to conquer Mobius. He is the leader of G.U.N and the Black Arms.

Shadow is black with a peach muzzle. The fur on his chest is white, and he has red stripes on his spines. He wears red, black, and white sneakers Soap-branded and ring-cuffed gloves (the rings are called Inhibitors). He has black eyes.

Shadow was designed as an evil version of Raven from Teen Titans. Unlike his other depictions, here Shadow is an emo who likes to write awful angsty poetry and chew bubblegum for some reason. He believes himself to be better than the other villains and if he runs into a stronger someone, gets jealous (and works for them in order to overthrow them if he can.) He thinks he can speak eloquently, but he can't.

Sometime before the present, Shadow became the leader of G.U.N and Black Arms, and was determined to take over Mobius. He took over the Eggman Empire and started his reign on Mobius. During this time, he kidnapped Sonic's mother Berdanette and Aunt Kimi, and eventually Sonic himself. He also plotted to use the Eclipse Cannon to destroy the world. He was stopped by Amy, Sally, and Mina, who had recruited the top trackers to infiltrate G.U.N. Once Sonic was free, Shadow challenged Sonic to a race. Sonic won, and as the Space Colony ARK neared Earth, the heroes and villains called it a draw and worked together to stop it. Shadow teamed up with Sonic to stop the the awoken Biolizard and Final Hazard out of envy of its power.

Mobius is at risk of a bleak future again when Shadow decides to team up with Metal Sonic to conquer the world. In the end, the kids were able to beat Shadow and Metal Sonic before they managed to achieve their goal.

Shadow came back again on what happened to be Halloween night, and took advantage of Amy's costume party to conquer the Eggman Empire again. However, he was up for 17 straight days and his fatigue and sleep deprivation led him to hallucinate he had vampiric traits, giving him a wonder exercise in writing more poetry. Amy stopped Shadow along with Cosmo and NiGHTS by proving the creaky old house in her neighborhood wasn't haunted, which he told them it was.

In the Shadow the Hedgehog arc, Shadow winds up having alien DNA (said to come from Black Arms) accidentally fused with his. He goes on a power trip, conquering the Eggman Empire yet again, and his painful inner turmoil caused by the DNA slowly but eventually drives him insane. His sanity is restored, however; but his ego is boosted as a result of the transfusion. He also learns he has an alien entity inside his head making him feel horrible until he can find a way to free it.

In the Next Gen arc, Shadow meets a doppleganger of him who goes by the name of "Mephiles." After Shadow learns just who he is, he gets menaced by Mephiles at every turn, eventually being forced to submit to him when he reverts to his crystalline form. Sonic and friends also learn Shadow's one true weakness is the Iblis seal.

Shadow in the Sonic Generations arc is sick with a sore throat, but he's still out on the prowl through his sheer stamina. He ends up being defeated by Sonic in a race, and finally succumbs to his illness.

In the Sonic Lost World arc, Shadow secretly follows Sonic and friends on their vacation to Windy Hill. However, he recoils when he learns he sprouted a zit on his cheek, leading him to conceal himself until he finally pops it. Afterwards, he tries to jump the kids like usual, but gets defeated.

In the Rise of Lyric arc, he meets his idol Lyric the Last Ancient and becomes his right-hand-man, while at the same time envying him quite a bit. However, Shadow also has to deal with the bad hair he woke up with. He fights Sonic for the last time in Lyric's base; but his pristine aural sense granted by his alien DNA picks up on a high-pitched frequency that slowly drives him more and more insane as they fight. After he gets defeated, he snaps.

During the Sonic Forces arc, he becomes strikingly jealous of Infinite when the latter is introduced. However, he gladly accepts to work for him and acts as a yes man of sorts.

Shadow can use Chaos Control. If he's angered enough, something within him will snap and he'll transform into Super Shadow, unless he can manage to calm himself down, which has happened on numerous occasions.

Shadow can rapidly fire guns and is a master at sharp shooting. He can also fire a blazing aura from his shoes when he gathers enough speed, allowing his sneakers to act like roller skates in some way. He received hyper intelligence from the alien DNA fused with him, to the point where it made him sometimes view everyone else as stupid and primitive.

Shadow can use a gun, drive a motorcycle, and has shown ninjutsu several times, which he learned from the Black Arms. He's also mastered instantaneous teleportation with Chaos Control. He's an expert at karate, as well.

His weakness is the Iblis seal. However, only those with the true Iblis seal can weaken him, and not those who harness Iblis' power like Silver.

He also doesn't take insults well, as shown when he flew into a blind rage after Sally called him a "black trash bin." If one criticizes him (and/or his poetry), expect them to be attacked.

Shadow is also a bit stupid at times; he once temporarily blinded himself with his phone's camera flash, allowing Amy to land a few more hits.

Retrieved from "https://sonicfanon.fandom.com/wiki/Shadow_the_Hedgehog/Mobius_Redrawn?oldid=1844444"
Community content is available under CC-BY-SA unless otherwise noted.