After you disappeared, I thought to myself that life wasn't worth living. But I met a few amazing people to help me come out of my shell. Amy and Silver are my true loves, Rouge and Omega have always been on my side, and every once in a while I look up at the sky and wonder how my nephew is doing in his world. 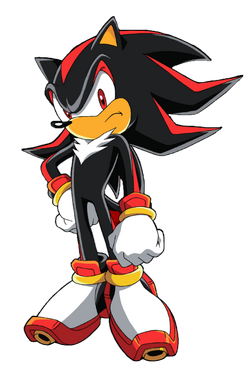 Shadow the Hedgehog is a character created by SEGA. His is known as the Ultimate Life Form created by Gerald Robotnik and the boyfriend of Silver the Hedgehog.

50 years ago, on the Space Colony ARK, Professor Gerald Robotnik was in his lab and came up with a brilliant idea. It took months to plan his study. Then he conducted his expierment in creating the ultimate lifeform. His creation was complete, Shadow the Hedgehog. He wasn't very old at first, but he grew.

Shadow also met a girl, Maria, who became the only thing in the world that made him happy. Shadow and Maria grew close together. He also witnessed the death of her, which was uncalled for. After Shadow killed all of the GUN soilders with his gun, the professor assumed that Shadow killed Maria, and sent him to earth.

For a while, he hated humanity. Though, he met the true fastest thing alive, Sonic the Hedgehog. The two became bitter rivals and always raced each other. Then a mircaulous series of events occured. As of now, the timeline of those events ceased to exist. That was when he met once again, Silver the Hedgehog. It was unknown why, but Silver had a crush on him.

Later on, Shadow and Silver started to go out as a gay couple. They loved each other to death. He also started to play football and got very good at it. He also met Louis Robinson. Shadow was invited to go on a journey with him. Later on, Amy and Shadow started to go out, which made Shadow bisexual. He made lots of rivalries and friendships.

Shadow has a bit of a cold adittude. He doesn't talk extremely often. He usually regrets most of the things he does. His adittude makes him very merciless. One way that he shows this is that he rarely ever smiles. Certain things make him happy, but it is rarely ever shown.

Shadow would also make a very good leader. He is basically fearless, and doesn't really have many emotions. Scary things to him wouldn't be very frightening to Shadow. However, when his anger is envolved, he is extremely dangerous to be around. You don't want to see a mad Shadow, otherwise, good luck getting out of it alive.

Despite all of Shadow's violence and negativity, Shadow also has an impish side. It is usually shown around Louis. A running gag occurs when Shadow calls him his nephew and then Louis reacts in several different ways.

Shadow only smiles around certain people. Shadow couldn't of been happier when he witnessed one last healing tank left used on Maria.

Football- Shadow has shown to have great skills in terms of football. His position is the wide receiver. He can throw a football at very far distances. This is where his speed and agility come into play, he could run across the field scoring constant touchdowns.

Ice Skating- While traveling with Louis, he has received very good ice skating abilities. This is goes for events such as speed skating, ice hockey and figure skating. His skills are pretty good.

Superspeed- Shadow is able to run at the speed of sound. He is probably one of the fastest beings alive. Not many people are faster than him, with the exception of Sonic the Hedgehog, of course. When he is running, he is physically fast. However, he can also use his hover shoes to hover skate. With or without the hover shoes, he is very fast.

Enhanced Strength- Though he is not as strong as the other characters like Knuckles, Shadow is physically strong. He has the power to lift over trucks and stuff. He has more raw power than Sonic, but less than Knuckles.

Agility- Shadow is also pretty agile. He is fast enough to focus on where to turn. Unlike others, he could avoid obstacles and still run at high speeds. This also allows him to dodge objects, unharmed.

Harnessing Chaos Energy- Shadow can now harness chaos energy and turn that energy into some sort of attack. He is very good at this power, and trains a lot to get better at it. Some of his attacks are chaos spear, chaos control, and chaos blast.

Retrieved from "https://sonicfanon.fandom.com/wiki/Shadow_the_Hedgehog/Darkest_Shadow%27s_Universe?oldid=1741926"
Community content is available under CC-BY-SA unless otherwise noted.