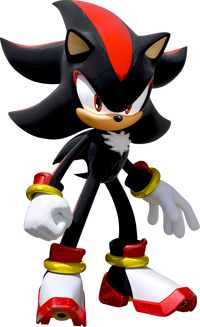 Shadow the Hedgehog is a character from the Sonic the Hedgehog franchise. He made his first appearance in Sonic Adventure 2 for the Sega Dreamcast. He's to be voiced by Jason Marsden, ever since Kovu's voice in The Lion King II: Simba's Pride, succeeding from David Humphrey, Jason Griffith and Kirk Thornton respectively.

Shadow the Hedgehog greatly resembles the appearance of Super Sonic. He has spikes on the back of his head and on his back that point upwards. He is primarily black with red marks on his arms, on his legs, on the spikes on his head and around his eyes. He always wears gloves with golden rings attached and jet shoes, which may or may not allow him to run faster.

First and foremost, Shadow the Hedgehog is often very serious. It is extremely rare for him to be depicted making any sort of joke, and he does not see adventures as joy rides the way Sonic the Hedgehog does. He is also depicted as being smart and wise.

Shadow is incredibly fast, most likely as fast as Sonic, but it is never fully explained if this is due to his jet shoes. Shadow also has the homing attack, which, as the name implies, allows him to rush and home in on nearby enemies.

Use of the Chaos Emeralds

Shadow has special abilities when using a chaos emerald. The most common is Chaos Control, which allows him to teleport from one location to another; although, in the game Shadow the Hedgehog, it seemed to make him fly really fast rather than allow him to teleport. It is also possible to slow down time with chaos control, such as in the multiplayer mode of Sonic Adventure 2 or in the game Shadow the Hedgehog. Shadow can also use Chaos Spear, which involves him attacking the opponent with an energy beam. In the game, Shadow the Hedgehog, Shadow was able to use an attack called Chaos Blast, where Shadow sends out a wave of energy in all directions, attacking all enemies within the blast radius. Shadow could perform this move multiple times once the dark meter was filled up in that game, but the move hasn't appeared since. In Sonic Heroes, Shadow could use Chaos Inferno to create a small tornado by rushing around the enemy a few times. There were various other attacks in Sonic Battle, that were all similar to Chaos Spear.

Start a Discussion Discussions about Shadow the Hedgehog