This is how Shadow is displayed in my imagination and in any of the roleplays I do.

Shadow never knew he had a brother or any family except for Maria. When Sonic and Shadow first met was the same day that Sonic invited Amber (human) to his world. Amber saw this and knew what had to be done. She stopped time when they were going to stop the Biolizard (Flame) and switched out Shadow with android so he wouldn't die. That’s why Shadow isn’t 50… Amber froze him within time and he never grew old. When the timing was right, she unfroze him near Sonic and she explained to the two that they were brothers…. Shadow didn’t believe and went his own way. Days later, he crossed paths with Sonic but they didn’t fight… instead Sonic told Shadow that Amber could teach him new moves but would have to stay in the castle with Sonic and Amber. Sonic handed Shadow a promise ring and walked away. Shadow thought about it for 10 hours and made up his mind. Under Amber’s wing, Shadow learned moves so advanced beyond his own being. Shadow grew liking to Sonic and Amber but that’s not what made him be Sonic’s older brother… Shadow wanted to leave but continued looking at his promise ring to Sonic. It was then Shadow found a picture in Amber’s mind. His mind was made up, he ran to Amber and bursted into tears. When they asked why, Amber saw her picture of the entire family with a list that said “My children who I’ve lost.” Sonic was shocked to see him as a 5 year old and Shadow there as well. Turns out Amber was actually a hedgehog but had to flee because one of her kids tried to kill her. She turned into a human to protect herself and her kids. From there on, Shadow vowed to stay with Amber and Sonic and be the best he can to aid the both of them.

Talk about what friends and/or family they have.

Characters that belong to others go here. It's best if you put the characters down yourself rather than letting anyone else edit it at will.

"As pathetic as you are, I am willing to duel you"

"You think you can defeat me!" 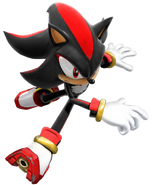 "My speed is better than yours and everyone's combinded, hog!" 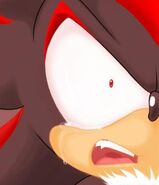 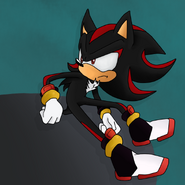 Drawn by me. Plz give credit to the original line art
Add a photo to this gallery

Retrieved from "https://sonicfanon.fandom.com/wiki/Shadow_The_Hedgehog_(SM97%27s_version)?oldid=1673007"
Community content is available under CC-BY-SA unless otherwise noted.