— Shade pretending to challenge Austin while playing with his friends, Shadow of the Storm

Shade the Zorua is a young male Zorua who makes a few minor appearances in The Legend of Fox the Brave. He is an orphan who was found by Stan the Wolf and later adopted by Pebble the Lycanroc and Aria the Zoroark, making him the adopted brother of Flame the Litten and Hope the Rockruff. Like Zorro before him, he has chosen to remain as a Zorua(though he is much more confident than Zorro). 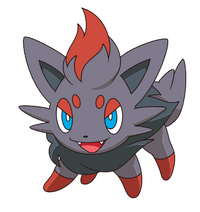 Shade is a young Zorua, and therefore resembles a black-furred fox cub with red paws, eyelids, and a red-tipped tuft of fur on his head. He also has a thick ruff of fur around his neck, bright blue eyes, and a short, bushy tail.

Unlike Zorro before him, Shade is confident and friendly, bravely challenging Austin(who is easily four times his size) during a game with the other children of the Refugees in Shadow of the Storm.

Shade's history up until Stan found him is unknown, but he mentioned to have lost his family during the Great Rebellion. He was found alone by Stan, and later adopted by Pebble and Aria, whom he quickly grew close to. He also grew close to Hope and Flame, his new adopted siblings.

Shade's moveset is unknown, but like all Zorua and Zoroark, he has the ability to create Illusions to disguise himself, which he sometimes uses to prank his siblings.

Like all Zorua and Zoroark, Shade can create Illusions to disguise himself, and likes to use them to prank his siblings, due to the prankster nature of his kind.

Pebble the Lycanroc and Aria the Zoroark

Pebble and Aria adopted Shade during the quest to find Samu, and he loves them dearly. He doesn't care that Pebble is a Lycanroc, loving him as a father.

Hope the Rockruff and Flame the Litten

Hope and Flame were also adopted by Pebble and Aria, making them Shade's adopted siblings. He frequently pranks them with his Illusions, but they know he means well and will play-fight with him when he's had his laugh. Dakota, Flame's caretaker until [Dakota's] death, has stated he's happy Flame has found a new family, not wanting the Litten to be alone(even though Flame is older than Pebble).

Shade is the second Zorua to appear in the series, the first being Zorro, though Shade is much more confident and sure of himself.

Retrieved from "https://sonicfanon.fandom.com/wiki/Shade_the_Zorua?oldid=1822980"
Community content is available under CC-BY-SA unless otherwise noted.