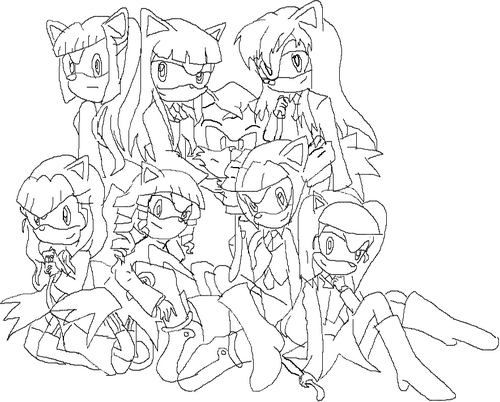 The Seven Fangirls from Hell were Mazda's loyal servants and, as the name implies, seven girls named after demons with an affinity for the Sonic franchise. They were originally "furniture" or servants, created by Ookamoni, but since then have set up their own lifestyle. They live in the suburbs outside Central City, but frequently leave to hunt for Sonic characters. They are each gamers, and spend much time practicing with their massive collection (so large, they boast to have every game in existence).

The girls are kind, despite their first impression. Though each girl has a sin they represented, this is normally offput by their will to help and heroic qualities. Over hundreds of years the girls have developed advanced fighting skills and teamwork, gathered from battling many enemies and going on several adventures. They have great teamwork and effective strategies, which causes many to think of them as Power types. In reality they are Speed types due to their agility.

The girls were created around 1000 years ago by Ookamoni as servants. He supposedly pulled them from Hell and gave them life and bodies. It's unknown what happened to them after this, however it can be assumed their Master used them in some plot to either conquer the world or defeat Mazda. Because they are tecnically posessions, they will serve whoever defeats them until they are freed by their current master.

Although introduced as villains, the sisters are seen as being very kind to guests and friends. They've set up a normal lifestyle and live comfortably in a large home in an Central City. Though most characters meet them while they explore the world to fight and search for Sonic characters.

Eventually the girls fought Mazda and his friends in a fight which they lost. After that, they became his servants and now help him to stop their former master Ookamoni.

The eldest sister of the girls. Her name comes from the Fallen angel Lucifer and she represents the sin of Pride. Her hair is straight and black. She is haughty and disdainful, but in fact takes pleasure in surrendering. Lucifer has a crush on Sonic and dreams of crushing Amy to reach him.

The second eldest of the sisters. Her name comes from the demon Leviathan and she represents the sin of Envy. Her appearance is a girl with middle-length green hair. Leviathan is childish, but also an envious crybaby that is willing to do anything to win. Leviathan hopes to defeat Tails, envious of his friendship with Sonic.

The third sister of the girls. Her name comes from the demon Satan and she represents the sin of Wrath. She has curly, dull hair. Satan is easily angered, but most of the time wants someone to be angry with her. She hopes to one day befriend Shadow so they may be angry together.

The hard-working and sensible fourth sister of the girls. Belphegor's name comes from the demon Belphegor and she represents the sin of Sloth. Her hair is dark and long, and in a ponytail. Belphegor hopes to stay with Knuckles so they may sleep the day away guarding the Master Emerald.

The fifth sister of the girls. Mammon's name is taken from the demon Mammon and she represents sin of Greed, she is extremely greedy and willing to do anything to get what she wants. Her hair is long and brown. She idolizes Rouge and hopes to learn her treasure hunting secrets.

The sixth sister of the girls. She's a gourmet and is willing to use even her own flesh if it is used to make a delicious meal. Her name comes from the demon Beelzebub and she represents the sin of Gluttony. Her hair is blonde and in two short drill pigtails. She serves as a calming influence among her sisters. She loves Jet and want to travel the world to find interesting new dishes.

Asmodeus is the youngest of the sisters. She wants to fall in love, and is willing to sacrifice her life for the sake of it. Her names comes from the demon Asmodeus and she represents the sin of Lust. Her hair is also blonde like Beezlebub's hair and in two straight ponytails. Her interest sways towards Silver, however she's content with settling down with anyone.

After taking in a strange cat called Crono she discovered that the young cat had feelings for her! After finding out that he had feeling for him she immediatlly thought of it as the sweetest thing ever. There where some bumps in the road such as facing off against Crono's evil mother Medusa, and Crono's lack of faith of being capable of love. But to prove all else wrong she infused her blood with Crono's black blood to show just how strongly she loves him (This now puts here in the Black blooded catagory). The two have faced enough trials together and are now boyfriend and girlfriend, but Crono still has a long road to go to build back his self-esteem, but Asmodeus doesn't mind helping out there!

Each sister shares the same abilities. They summon swords from thier arms, made from light, and can create a strong forcefield. However they're much more powerful together. They'll use agility and speed to swarm around their enemy, tearing them apart. This also works in the case of their forcefield, which can withstand all earthly weapons and attacks. However it is much stronger when they work together. This forcefield can also neutralize enemy powers if they're caught inside it as well. While the sisters are dangerous fighting seperately and deadly fighting together, if you can divide them and make them fight each other, their odds of winning are cut down to a fraction. However, if they still outnumber you, this number is still incredibly high.

Add your name if you're an enemy, friend or anything.

Asmodeus, the seventh sister.
Add a photo to this gallery
Retrieved from "https://sonicfanon.fandom.com/wiki/Seven_Fangirls_From_Hell?oldid=1780731"
Community content is available under CC-BY-SA unless otherwise noted.