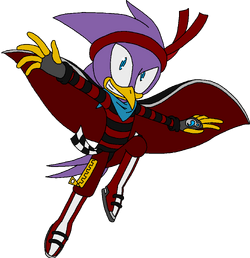 Sephtis is a purple-feathered eagle with blue eyes and a sharp yellow beak. He has two purple feathers on his back, and he stands at 3'2". Weighing at 58 lbs., Sephtis wears a red bandana on his head, wrapping it around the upper part. He also wears a blue bandana on his neck, along with a red-and-black-striped shirt. He wears gloves with grey bases that covers his fingers with yellow cloth, alongside a red and black cape with white lining. He wears red pants with a yellow pocket at the lower part of his right leg with red-and-white shoes.

Leunga Sephtis Briona the Fifth was born to Leunga Sephtis Briona the Fourth and Brianne Briona the Twelfth. Coming from two long lines of assassins, Sephtis was trained like them, born to be a killer. However, they made it more... fun for him, making sure he didn't grow up to be a crazy psycho. Thus, Sephtis was half-raised like a normal kid and half-raised as an assassin-in-training, which is the reason he grew up to be the thrill-seeking, hyperactive joker he is currently. 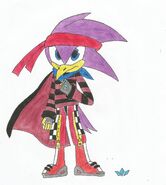 Sephtis along with his teammates, White the Rabbit and Tina the Bat by Xoph!
Add a photo to this gallery
Retrieved from "https://sonicfanon.fandom.com/wiki/Sephtis_the_Eagle?oldid=1830858"
Community content is available under CC-BY-SA unless otherwise noted.