"Promise you won't tell Amy or Tiara about this, okay? Those two are crazy... They'll kill me if they find out!"
—The Goddess of Destruction Part 7

Seedra, the Goddess of Leaves, also known by her experiment codename, "EG-002" (pronounced "Eee-Jee-Double-Oh-Two") is a character from SolarBlaze's episodic fanfic, Knuckles' Chaotix: Elements of Power. She is the second of Dr. Robotnik's Elemental Goddess Experiments (often abbreviated as "EG Experiments"), cloned from Scorch's DNA.

Seedra's personality is much, or rather, almost exactly like Splash's; kind-hearted, caring, and peace-loving. She has a strong sense of justice, and can't turn a blind eye to evil in any way, shape, or form. Similar to Amy and Tiara, Seedra has been shown to have a crush on Sonic, but unlike the two of them, she's much more shy about it, preferring to keep it secret (although, she did accidentally blurt it out at one point, but not while Sonic, Amy, or Tiara were there).

Seedra has the ability to control plants, make vines extend from her back (which she uses in various ways), use solar-powered attacks, and others.

Seedra is the second of Robotnik's EG Experiments (with Squash being the first). Robotnik's method of creating her was practically the same as Squash, only this time around, he infused a sample of the leaf element with Scorch's blood and the ordinary, colorless gem. Before Robotnik had a chance to bring EG-002 to life, he ended up misplacing the gem at Red Mountain, but was quickly found by Tikal. EG-002's fate was left up to the rest of the Chaotix team. Fearing that she might turn out like Squash, most of them were in favor of destroying the gem, but Tikal and Mighty the Armadillo convinced them to spare her life, stating that she could possibly be a value ally to them in the future.

Episode 3: the Goddess of Destruction

"I already know what you’re about, Doctor. Your goal is to take over this world, and if you think I’m going to join you, then you’re sadly mistaken! Even if you are my creator, I want no part in this! Conquering the world…that’s just sick and wrong, and I would never do something like that!"
—Elemental Chaos Part 4

Despite being her creator, Seedra immediately began to see Dr. Robotnik as an enemy after being informed about him by the Chaotix and company, stating that she would never do something as "sick and wrong" as trying to conquer the world. From that point on, Robotnik labeled her as a "traitor", and intended to dispose of her along with the other heroes.

However, whenever the situation calls for it, the two of them have been known to put their differences aside, as shown towards the end of Elemental Chaos, where Dr. Nega betrayed Robotnik and tried to destroy the Earth. Like Splash, Seedra's begun to see that there's some "goodness" within the doctor, which he immediately scoffed at, stating that he only joined forces with the heroes to further his world domination plans.

Throughout the course of the series, Seedra has had minimal interaction with Sonic, but despite that, she ended up developing a crush on him the first time they met. However, even though Sonic is fully aware of her crush on him (thanks to Charmy), Seedra has not attempted to make any moves on him, partially because of her own shyness, as well as her fear of Amy and Tiara.

"I can't tell you how lucky I am that I have a friend like you..."
—The Goddess of Destruction Part 20a

Seedra first met Ray sometime during the events of Elemental Chaos, but around that time, the two of them never had much to say to each other. It wasn't until the next episode where that began to change. During the events of The Goddess of Destruction, Ray and Seedra partnered up to go find one of the Elemental Chaos Rings in Station Square after everyone else had also split into groups of two in order to find the rings at other locations.

During their mission, the two of them started to become good friends, and Amy assumed that they were on a date, even going so far as say that they "[look] cute together", but they assured her that nothing was going on between them, and that they already have their eyes on other people. Despite that, Ray and Seedra still get along quite well, even to the point where they began sharing secrets with one another. Also, Seedra later on injured herself after trying to save Ray from one of Metal Sonic 3.0's attacks, and he later on thanked her, saying that he "owe[s] [her] one".

Ray later on repaid that favor during their encounter with a brainwashed Mecha Amy, who ended up using her bio-energy absorption technique on Seedra. Just as she was about to deliver the final blow to the Leaf Goddess, Ray stepped in to help her, putting his own life on the line in the process, just as she did for him earlier on in the story. It was also partially hinted that Seedra has developed on slight crush on Ray after this incident (as Amy has continued to suspect).

"You're most welcome. I'm always happy to help out when it comes to the subject of love!"
—The Goddess of Destruction Part 7

Surprisingly, Seedra has been shown to get along with Amy quite well, but that's only because the latter is unaware of the fact that they both have a crush on the same guy. In fact, Amy is so oblivious to it, that she even went so far as to offer love advice to Seedra (and Ray) during the events of The Goddess of Destruction (just as she did to Elise in Sonic 2006). Unlike Amy, Seedra's perfectly aware of the fact that they're both in love with Sonic, and noted that things would be a lot different between her and Amy if she ever found out about it. For that reason, she's been doing her best to keep that hidden from Amy, as well as Tiara.

Coincidentally, the Elemental Goddesses and the Number Line happen to have several similarities with one another. Seedra is by no means an exception, having much in common with Septette. 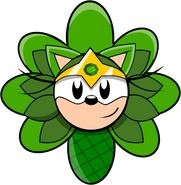 Seedra as a flower, drawn by SparksyChan.
Add a photo to this gallery

A Sonic Battle card of Seedra. Credit goes to Azuroru for the sprite.
Add a photo to this gallery
Retrieved from "https://sonicfanon.fandom.com/wiki/Seedra,_the_Goddess_of_Leaves?oldid=1871100"
Community content is available under CC-BY-SA unless otherwise noted.