I'm sick and tired of being the outcast of your clique, David. Half of the time you never bother to tell me the shit you guys friggin' do. And every time I tag along with you, you treat me like a piece of fucking shit. Well guess what, you and your posse can do whatever the fuck you want now don't even bother to ask me. See you around, shithead. 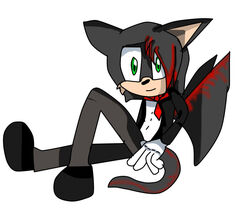 Sebastian the Fox Hybrid is a gentleman-like character created by Darkest Shadow. He is currently the boyfriend of Michelle the Cat, former butler of Lili the Cat, and a recurring character in the Mariala Anime. He was part of David's clique for a long time until he dropped a bomb on the skateboard park completely destroying it.

It is his mission to find a way to help his dear friend, Mimi, escape from her prision.

Sebastian Ademeus Park is a twenty-one-year-old black hybrid of a fox, bat and hedgehog. He currently resides in a fairly small house in Tamaruin City. Currently, he is allied with Fright the Wolf as a revenge seeker on David an his clique, transforming from his go-to buddy to his worst nightmare.

He usually likes to attend high class parties, still being seen as a high class citizen. He is a part of the High Rollers, a group of sophisticated people who usually host galas.

Now known as the Great Betrayer, Sebastian has proved to be able to hold in greed for a while. He is shown as a major two-face and a hypocrite which none of David's friends like. He was also just pretending to be nice for three whole years, which makes him a great actor.

Before his betrayal, Sebastian was a kind gentleman for a man. His kind attitude makes him sound like a nice fellow to be around. His manners are top notch and has very kind discipline.

Standing at a shockingly tall 4'1, and weighing in at 90 lbs., Sebastian is a black furred hybrid of a fox, hedgehog and bat. His muzzle is furry, having two tips on both ends and that, skin inner ears are all a paler color of peach. He has one slightly "emo" bang slightly covering his left eye. His bat wings are a little smaller than normal, with no skin on the inside. His much tail is longer than a hedgehog's and much shorter than a fox's. His bang, tail and wings all have blood-red streaks on the tips.

His current attire is unknown as of right now

When he was a butler working for Lili, Sebastian's style was very classy and expensive. He wore a white long sleeve button down top with a collar facing down. Over that he wore an unbuttoned black blazer with the deRochefort's company's label on the side. Matching his streaks, he wore a red tie. For pants, Sebastian chose light grey dress pants and black dress shoes. For accessories, he also wore white gloves.

Basketball- Sebastian has also shown to be pretty good at basketball. His skills are pretty good. He is a pretty good player on his team and shoots baskets at his house.

Taekwondo- Sebastian is a pretty good fighter of taekwondo. His skills are pretty good, and his attacks are pretty strong. They aren't extremely powerful, but he has potential. Usually he trains if he's not skateboarding.

Attack:9- Sebastian's taekwondo is his best physical strength, and he uses it very well.

Speed: 6- Sebastian has average speed, but he's a little slow.

Magic: 7.5- Sebastian's fire manipulation is pretty strong and can cause quite some damage.

Evasion: 8- Having wings, evading attacks has became so much more easy.

Intelligence: 9.5- Sebastian is highly intelligent, and took all AP courses.

Skills: 6- Sebastian's skills are good, but they can use improvement.

Stamina: 8- Sebastian has great stamina, and doesn't get out of breath often.

Retrieved from "https://sonicfanon.fandom.com/wiki/Sebastian_the_Fox_Hybrid?oldid=1743612"
Community content is available under CC-BY-SA unless otherwise noted.