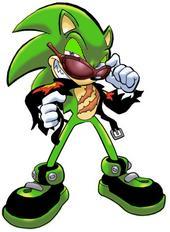 Scourge the Hedgehog is the Moebius counterpart of Sonic the Hedgehog, as well as the ruler of Moebius.

At about seven years old, Scourge's father, Anti-Jules Hedgehog, had promoted greatly of the Great Peace on the dimension known as Moebius. Because of this, Scourge had barely any interaction with his father, calling his father "a man with empty words". After ten years passed following the beginning of the Great Peace, Moebius fell into a state of decline and stagnation and when it reached rock bottom, Scourge was ready to seize power. He killed his own father and taking control of Mobotropolis and ruling it with an iron fist.

Scourge is an anthromrphic headgehog with green fur, peach skin and blue eyes. He wears a black jacket with orange flames on the sleeves, white gloves, green leather sneakers and red sunglasses.

Since he is an evil alternate version of Sonic, Scourge has all of Sonic's traits, just darkened and at times, turned on their head. While Sonic enjoys the company of his friends, Scourge has none, and sees his allies as pawns to help him prove he's the best; Sonic's respect for women is flipped in Scourge's status. In addition, where Sonic often considers his battles as sport, Scourge fights to prove that he is the greatest by introducing his opponents to excruciating pain, and, if given the chance, killing them. However, his arrogance, amplified from Sonic's usual cockiness, makes it easier to defeat him.

Scourge has all of the powers and abilities that Sonic has, but rather enhanced. Scourge is stronger and has more stamina than Sonic and can easily take on Sonic and Shadow single-handed.

Scourge had a difficult relationship with his father, Anti-Jules. When he was only seven years old, his father contributed greatly to the Great Peace. However it seems he made little time for his son. While he seems to have some mocking respect for how Anti-Jules "brought everybody together in one big group hug", he also complains that his father was full of empty words, and the peace was nothing but stagnation.

Retrieved from "https://sonicfanon.fandom.com/wiki/Scourge_the_Hedgehog_(Marshalia13%27s_Universe)?oldid=1786392"
Community content is available under CC-BY-SA unless otherwise noted.