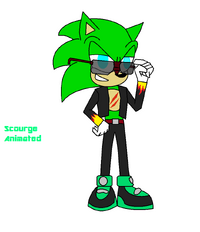 Scourge the Hedgehog is one of the primary antagonists of Sonic Animated series. He is voiced by Khary Payton.

He looks like Sonic but has green fur and blue eyes. He sports a leatherjacket with chains and green/black shoes. His teeths are sharp as well. Unlike his Archie counterpart, he has Gargoyles glasses.

Scourge is known to be very greedy, arrogant, impatient, cocky and does not care about anyone except Fiona and his comrades. He likes to flirt with Amy Rose and Rouge during their fights, only to get his glasses crushed by them.

He was once one of the most wanted Bounty Hunters on Mobius along with his girlfriend Fiona. They came to Earth some time after the heroes and Eggman landed there at some point. Since then they have been fighting many times during the chase of chaos emeralds.

His powers is much the same as Sonic, having superspeed and mounts of stamina, except instead of blue tornado he has green tornado. Like Sonic he can also transform using the chaos emeralds.

Like Sonic he can preform spindashes, homing attacks, tornado attacks etc. But he uses them in a much more lethal way than what Sonic does.

Scourge is professional in using weapons and has great reflexes and agility. Besides that he is also known to be able to convince others that Sonic and his team are traitors.

Retrieved from "https://sonicfanon.fandom.com/wiki/Scourge_(Animated)?oldid=1780395"
Community content is available under CC-BY-SA unless otherwise noted.