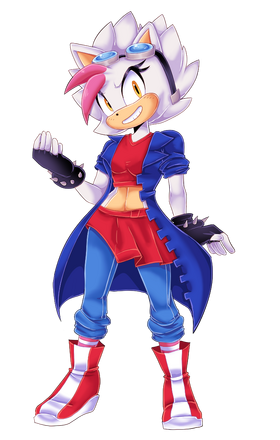 Schnee is a white-furred hedgehog who stands at 3'5 and weighing 78 pounds. She has yellow eyes, but they're slightly mixed in with a tint of orange. Her head-quills are more than eight, and they all point upwards. Her ears are actually lower than her quills. She has back-quills on her, well, back that are sleeked down by her upper shoulders. She has tan skin, and her cheeks are slightly rosy. She also has two strands of hair that come from her forehead, and their middles to their tips are dyed pink.

As for her outfit, Schnee wears very... vibrant colors. She usually dons a blue trenchcoat that she leaves completely open, wearing a red undershirt that only goes to the bottom of her chest, leaving her tan-skinned white-furred chest revealed. She wears a red skirt-like piece that is commonly tilted to the right along with blue jeans. She wears black fingerless gloves, and their cuffs have grey spikes on them. She wears colorfully-striped socks and red shoes with white stripes through the middle. She wears eye accessories, too - she usually wears blue and black goggles or white and golden shades.

Schnee is a very eccentric girl. She presents herself as a very loud and joking person, always having something to say in any moment. This makes her a bit of a loudmouth - half of the time, she says what she wants to say without thinking, so this can make for some... less than fun experiences. Schnee racks up lots of adrenaline very easily, and she is a large risk-taker - she doesn't really care for the danger, she's more always looking for entertainment, which was a large detriment to her when she was in Aorki's group while still being untrained.

Despite this, Schnee very much does care for protecting people. She especially doesn't like it when there's a threat to one of her friends - after all, having friends isn't something Schnee is used to, so she doesn't want them to feel bad. Secretly, Schnee worries that she'll do one stupid thing that'll cause her to just throw away all the great times she's had with her buddies and go back to being a loner, and her time with the Aorki group certainly defines this.

Schnee is also insecure about herself. While over time, her loudness has become more natural, Schnee is also extremely judgmental on herself. She doesn't think before she does something, but she thinks after it, and she often criticizes herself. This is partially because of how she was always bullied in school, and how she always felt that she was being bullied by her father. This created a side of Schnee that was always resistant to those who would oppress her for no good reason, and this is also why Schnee often stands up for herself. This means that when annoyed, she can go from miffed to a full-on furious rant in just a few seconds.

Schnee has a very playful personality, often teasing others... but she also teases herself. When she faces an emotion that she doesn't want to feel, she will often just try to block it out. This occurs, for example, when Schnee developed a crush on Kennedy, who she knew she'd probably never have a chance with and tried to reject but she just really liked him. Schnee also gets flustered moderately easily when in this state, showing one of her rare moments of emotional vulnerability.

Schnee Bianca Ainekas was born to Willow AInekas and Jackson Ainekas, little sister to her brother Alban. Her circumstances for being born weren't ideal, however - she was born the second bastard child to two parents who weren't actually married. Jackson wanted an abortion, but Willow thought she could handle the child and... she was wrong. The family spent a lot of their time in poverty - they would've been fine with just Alban or just Schnee, but both of them were really expensive for the unexpected parents.

Schnee doubled the cost, and because of that, the whole family had to pay. Jackson, feeling guilty for causing the family to nearly dive into poverty, starting working double jobs, barely enough to keep the family on their feet.

Jackson urged Willow to do the same, but the latter had been so stressed with her job already that she got into drinking. Because she constantly wasn't thinking straight, she was fired from her job. Though Jackson tried to urge her to think clearly, she got mad at him while in a drunken stupor, saying "it was all his fault." She issued a divorce petition against her husband, and they did get divorced - it just wasn't in her favor. Jackson was the one who had to keep the kids. And thus, Alban and Schnee lived most of their childhood not even remembering their mother.

Schnee took an especially hard fall due to these events and the fallout - Jackson no longer had Willow to blame for his problems, so he resorted the next target... Schnee. He often verbally abused Schnee, being especially harsh on her whenever she did something wrong and still being a jerk to her when she was doing good things. Schnee didn't have a happy childhood, mainly because of this; Jackson was just always stepping on her confidence as she was growing up, telling her how incompetent she was all the time.

This translated into Schnee's school life, too (where Alban was now nicknamed White) - she didn't know how to stand up for herself, so others constantly put her in the dirt with with words. Schnee took in interest in math and science, which was even worse for her, because now, she had reason to be called a "nerd." Schnee didn't retaliate, though; she just kept her head down and tried to get through the day.

Schnee's social life was non-existent, which gave her a lot of time to herself. In this time, Schnee was interested in two future job careers - being a cop, and being an engineer. Schnee feared she didn't have the social strength to be a cop, so she heavily focused on making things, looking up things and learning how to make a series of things, starting in robotics and going to make things that had no use but... were lots of fun to her. This is what made the otherwise depressed Schnee happy; she was able to put her imagination to use and just go wild, and that's what she loved doing.

When Schnee was 10, she was really tinkering with lots of stuff, buying things online to use for equipment. This wasn't the happiest time in the family, though; her fourteen-year-old brother White and her father had gone on an errand run, and a reckless driver had severely injured her brother. He was given prosthetic legs by hospital officials, but seeing this, Schnee asked White if she could modify them. White let her do her thing.

Schnee couldn't believe her luck; her own brother was allowing himself to be experimented on?! This was the amalgamation of what she'd loved doing for so long! Over the course of a few months, Schnee added more and more features to White's leg, including heightened jumping ability and nerve triggers. However, Schnee's excitement starting overflowing, and via buying most likely illegal things online, she was even able to give him bullets fuel, and a form of heat manipulation.

This was the last straw for Jackson - he'd been sick of Schnee ever since the divorce between him and Willow, and this was his excuse for him to get Schnee out. He yelled at Schnee for what she'd done, turning his "correct" son into a weapon. At one point, when Schnee had actually tried standing up for herself, she was slapped. Jackson was extremely angry with Schnee, telling her that if she couldn't shape up, she was going to get kicked out.

At hearing this, Schnee was tired of listening to his endless slandering and insulting. She didn't give him the satisfaction of kicking her out; she left by herself, not knowing where she was heading but just wanting to get away from school, the bullies, and most of all, her father, taking all of her belongings (or at least most of them) with her. You could probably guess this didn't go all too well - she didn't really know how to navigate, so she was lost in just a few days. In these few days, she was able to travel long distances, focusing less on the destination and more of a journey. It didn't help, however; Schnee was hopelessly lost.

Schnee done by SigmaAlphaThree, thanks!

An alternate design by Schnee done by SilverKnight on the SFCW!

Schnee's first picture by Xoph, thanks!

Schnee done by Luvsi, danke!
Add a photo to this gallery

One of Schnee's main capabilities is how well she is able to handle technology. Though she is mostly self-taught, Schnee is extremely skilled in tech and engineering. She is able to hack into government, bypass the most protected firewalls, and can decode nearly password. This also applies to engineering - after all, Schnee was the one who made her brother White's prosthetic legs. She has also made a series of guns and other inventions, showing how capable she is.

It wouldn't be enough for Schnee to just make guns, however - alongside her friend Mac, they worked together to learn how to use them. She is proficient with most guns, but her marksmanship is not top-notch - she relies far more on power and hurting the opponent than finesse and actually hitting the opponent. She also is skilled with a number of firearms and weapons that she probably shouldn't have access to.

At this, you might ask, "then how does she have access to them?" This is where Schnee's one "power" of sorts comes in - hammerspace. A gift that she acquired given to her by Aorki, this is how Schnee can be holding a poisonous dart one second and a rocket launcher the next. It has its faults, however - it resides in her trenchcoat pocket, and ripping up that would disable the hammerspace for a long time, and it would take a lot to repair it.

Schnee's most common weapon is a metallic, lightweight bo staff she made. It has three modes: its normal mode, in which it is mostly a normal staff but it can release shocks of electricity, its gun mode, where it opens a hole out of one of its sides and can now fire several types of bullets, and its blade mode, in which a short blade pops out of one of its sides and she can now use it to cut things.

Retrieved from "https://sonicfanon.fandom.com/wiki/Schnee_the_Hedgehog?oldid=1870564"
Community content is available under CC-BY-SA unless otherwise noted.