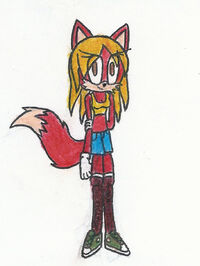 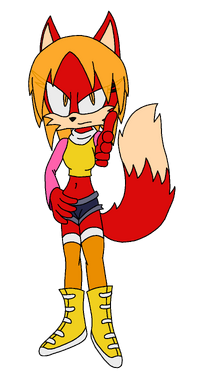 Scarlet June the Fox, the hot-headed gunslinger. When the series needed a strong female character, she just plopped into faces. As a member of Team Mask and not even close to a pushover, she’s not as prominent as either Mac or Kennedy, but still plays a large role in the series as one of Team Mask’s core members. A character I’ve wanted to make a page for for a long time, please enjoy!

Though the name might have given you a vague clue, Scarlet’s fur is red. However, at the tip of her bushy tail, you can see that the jagged fur that is supposed to be white is actually a darkening pink that is not dark enough to even go into “light magenta” mode but still dark compared to most foxes. She also has medium-long-length, light orange hair that doesn’t go below half of her back. Along with that, she has orange eyes with tiny bits of crimson sprinkled throughout them.

Scarlet's appearance changes quite radically in the third season. Her tank-top is now a crop-top that's yellow around her chest with long, pink sleeves and a white collar. She wears dark blue jean short-shorts, orange socks, and yellow shoes, giving her a rather fiery vibe.

Scarlet is Team Mask’s resident hothead. More like Max Irvaron than Mac himself, she is easily annoyed and snarks constantly. Though she makes up with it with brains and courage, she can be seen as overbearing to some.

She is constantly trying to get a lead on something new - she knows she’s overshadowed by her other two team members, so she always goes one hundred percent in everything. She tries to impress others by showing them new ways to do things, and she is the “thinker” of the group.

Scarlet can get very mad very easily. She does not like things that either confuse her or don’t make sense, and always tries to make sense of a situation. An example of this is when people are presenting new and unconfirmed theories and questions in Depths of Dimensions, causing her to go mad and start threatening everyone. However, when it gets so big that she knows things are going to get strange, she tends to lay off and let things happen. Though she doesn’t like it when things don’t go according to plan, she can deal with a surprise or two every now and then.

Though you wouldn’t notice at first glance, Scarlet is not the best at interacting with new people - when it comes to relationships, she prefers to let things go with the flow. Though when pieces come together on their own, she can handle it, but the only reason she’ll talk to you if you’re not her friend is because you’re doing something wrong.

Following up on that subject, Scarlet hates it when she (or anyone, for that matter) messes up with something simple or presents a threat to the situation at hand. This is presented in Depths of Dimensions, when she tries to comprehend and capture Keira the second she gets a hold of the latter’s energy signatures.

Though with details above, you might get the idea that she is an introvert - however, that is false. She is a very loud person who is never afraid to voice her opinions. She is also very courageous - she is willing to sacrifice herself for the greater good if necessary.

How to Tame Your Anger

Scarlet was born to Dawn and Julius June, two ordinary people living in Station Square. Though Scarlet was always prone to throwing fits when she was younger, they were a generally generic and happy family.

Scarlet was joked to have OCD in school, reasonably - she could not handle people doing things that were so simple to her wrong, earning her a “clean freak”-esque reputation in school. But Scarlet didn’t ever worry about that - it was elementary school, things never got too bad with bullying there. She was one of the best in her classes, and though she wasn’t the smartest, she got good grades.

However, Scarlet was smacked upside in the head by life when all of her success came burning down… literally. She was on one of her mother’s errands on a fairly average day to the bank to make a deposit. Scarlet, who thought about being a banker when she was older, decided to take notes on what one does.

Her notes were destroyed in the fire.

Suddenly, the bank was bombed by a terrorist, who was also attacking the city with a group, demanding that G.U.N. should get toned down to only protecting the area around them (for GUN is international) or that they shouldn’t be existing at all. The walls came crumbling down, and Dawn managed to help her daughter escape, caught in the destruction. Though she asked for Scarlet to tell her father she loved him, Scarlet would never see her dad again as she fled.

Scarlet ran and ran and ran away from the carnage mess of a bank. For she was far away, she didn’t know how to get home, and did all that she could - cry. However, after a few days of being hopelessly lost, she witnessed a gang of thieves in action. The nine-year-old Scarlet, knowing this would be her only option to get off the streets, she went to them and asked them if she could join.

A lot of consideration was put into Scarlet’s recruitment - she was just a child, and she wouldn’t benefit much to the group. Team leader, Marcus the Raccoon, realized that if she joined them, she would be a living alibi, and she could simply say that they had saved her if they ever got in trouble. Knowing this, Marcus welcomed her with open arms, if not for selfish reasons.

Scarlet would spend the rest of her days in the group stealing and not getting caught. She made sure to stay hidden most of the time - if people saw her with the gang constantly, she wouldn’t make a very good alibi…. At least, that’s what Marcus told her. She would make some friends in the gang (well, basically friends, but they weren’t all that close) - Buck the Racoon, Marcus’ son, Blitz the Cheetah, Buck’s half-brother, and Shirley the Echidna.

Being trained by Mac, Scarlet has picked up a very useful ability - extrasensory perception. She can sense the flow of energy waves, and thus can react to movements by predicting where the signatures go next. She can also use her own energy to strengthen or defend against attacks - it’s how she keeps up with powerful opponents, but she only has so much energy to begin with that she doesn’t make herself that much stronger.

Along with that, Scarlet can manifest her life force in forms of energy, allowing more projectile potential. Her most common form of manifesting it is through the use of quick red lasers to either throw off or finish off her opponent. Whenever Scarlet performs some type of energy attack, it will be red, similar to her aura. Howeever, when she does this, she uses her supply of life force energy, and if she uses it all, she will be even weaker than the average Mobian.

Everything here is things she learned when she was younger, or when she was being trained by Mac. Having done a lot her life, she’s obviously picked up some skills, so let’s start!

First of all, she has her combat prowess. Though it wasn’t nearly as apparent when she was younger, she’s improved a lot currently. She is much faster, stronger, and durable than the average Mobian even without strengthening herself - this is because she’s been in a lot of situation where she needs to be better, and thus improves.

She can also handle a gun extraordinarily well. She is a very good marksman, and though she has a low chance of hitting someone when she’s moving, she can predict where they go with her extrasensory perception to the point where she can shoot a moving target.

Finally, Scarlet has her reaction speed. A common skill that all members of Team Mask have, she’s able to react to something quickly, based on estimating their speed. While she’s not as good as Kennedy, she's arguably as skilled as Mac in this regard, and she can still do it well.

It has this air to it that doesn’t represent elegance, but instead demands respect.

Sketches of her, also by N8.

Scarlet by blissfulangel1993 on DA, danke! 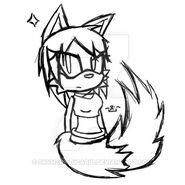 Scarlet done by Skyrowl, thank you!

Scarlet with her gun by Sonic155 on DA, thank you!

An amazing picture of Mystic Fever Scarlet by Starry! It looks so good! Thanks!

Scarlet by N8 again in her Mystic Fever version, thanks! 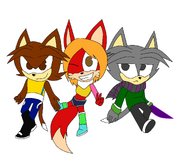 Scarlet with her teammates in a chibi style by Lee, it's adowabull!
Add a photo to this gallery

Retrieved from "https://sonicfanon.fandom.com/wiki/Scarlet_the_Fox?oldid=1872232"
Community content is available under CC-BY-SA unless otherwise noted.