This OC belongs to Luvsi, do not use. All art is by Luvsi. 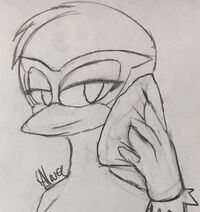 Savanee is a tall, albino swan that's about the height of vector. She is thin and curvy with a long neck and black outline around her eyes, the edges pointing outwards. Her fur on her head is swooped to the side and downwards like a pixie cut. On her front torso is a black belly that does down to her abdomen.

Depending on her choice of fashion she could appear three ways; wearing nothing but fluffy wristbands and black heels, wearing some flamboyant ballgown, or the first option with a cape of feathers that starts around her waist.

Savanee is anything but perfect, despite her appearance. She is a spoiled girl who has lived the life of luxury her entire life. She is extremely flirtatious, sometimes even doing it to annoy and can't stand being stood up to. Yet she's also insane, pretty much willing to kill anyone who stands in her way of getting what she wants. Being as bossy as she is, she's also extremely arrogant and narcissistic, thinking of herself as a goddess.

Savanee was spoiled as a child, getting anything and everything she has ever wanted. She was so spoiled that on the first day her parents refused to give her something, she slaughtered them. This made all of the people working for her, fear her as if she were the daughter of Satan. She soon came to Eggman with enough money to bribe him to make her a mask. A mask that can control the mind of its wearer. Savanee retreated to a deserted island where she has brainwashed many into serving her like she was a god.

Savanee, being as egotistical and narcissistic as she is, is susceptible to certain persuasions where she is praised and complimented. At the same time her anger management issues often get the best of her. Savanee's masks are also made of weak metal, making them easy to break.

Retrieved from "https://sonicfanon.fandom.com/wiki/Savanee_Swan?oldid=1826358"
Community content is available under CC-BY-SA unless otherwise noted.