But I miss you! We haven't talked in forever, for god sake's I'm your sister. The closest I'll ever get to seeing you nowadays is on tour! Think about it Lex, when's the last time we had an actual conversation?

— Sasha on FaceTime with her sister 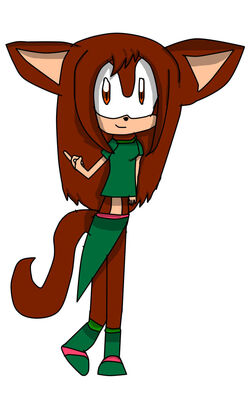 Sasha Petals is a fan character created by Darkest Shadow. She is a fashion designer, making designs for several models in the country. She is currently a senior in college and attends the University of Alskora.

Sasha was born on July 27. As a child, she was surprisingly calm. Her parents loved her dearly and thought she was going to be the only thing that made them happy. She loved her life and rarely cried.

At 3 years old, when her parents had Alexis, the two enjoyed each others company. Sasha also started to go to preschool. She didn't really like it that much. Her aunt also made her a sweater with everyone in her school thought was beautiful.

Later, during 4, Sasha'a aunt taught her how to make clothes. She was bad at the skill at first. Her aunt lied about how "beautiful" her outfits were.

At 7, Sasha became much better at designing clothes. She was scared to go into 1st grade, but then she became brave and did so. She also was inspired by a woman to learn yoga. She became good at the skill in days, which then turned into weeks of practice.

A year later, she met her first ever true friend, Lina. The two of them talked a lot. Also, she heard about how her sister was going to be a great singer, and encouraged her to live her dream. Her skills in designing clothes have improved as well.

Around 10 years old, her skills at designing clothes were outstanding, without a lie. She also met a young girl named Maranda. The two along with Lina became best friends. She also started to play the oboe in her band class.

During her first year of middle school, everyone was scolding her on how horrible the sound of her oboe is. She then started to take interest in skiing. So her mother signed her up. She wasn't very good at it though, as she kept falling off.

One year later, she took off with her skiing skills and tried lots of events. Her best skiing event was Moguls and Aerials. Then, a girl named Michelle, Maranda's little sister, watched her skills. She then told her how good Sasha was at acrobatics, and wanted to work with her in acrobatic training.

During her final year, she was fascinated on her little sister's talent for singing. She also started to play oboe-flute duets with her sister. Her skills for fashion and designing clothes were now over beautiful. She also saw a girl, Christina, getting picked on. She recognized her when she was judging a fashion contest with her in it. She got them away from her, as the two became friends.

During her first two years of high school, with the help of Michelle, her acrobatic skills were much better. And of course, that means her moguls and aerial tricks were much better. She then started to focus more on speed, as she needed it to compete in Alpine Skiing and the Ski Cross.

Also, her oboe playing improved drastically and started to go places with her little sister as she is a worldwide singing sensation. Her fashion life got her into many magazines.

When she graduated, lots of Alskora College representatives came up to her and were literally begging to go to their college. When she accepted, she had to leave them, for Alskora City was very far from her house. She had to say goodbye to Michelle, Christina, her two best friends Lina, and Maranda, and of course, her sister, Alexis. She promised all of them that she'll visit them all again.

As of now, Sasha lives in Alskora City, as she also goes to their dormitory college. She currently likes at well as the new friends she has made. She currently keeps her promise as to visit her friends back in Mariala City, and even Gaudia, of where Lina is staying at.

Sasha is very kind hearted and full of pride. She shows her pride by thanking them and shaking their hand, if its a close friend, she'll even give them a hug. This makes her very liked, not popular though. Lots of people including her little sister look up upon her.

Sasha also shows much sympathy and feels empathy for others who are in a bad mood. Most of the crimes are things that she could relate to. She always tries to make comfortable. She thinks that cheering somebody up by a friend doesn't really work.

Sasha also always knows what to do during a problem. She is pretty smart when it comes to that kind of stuff. If a person is feeling lonely, she tries her best to introduce somebody to a person with the same kind of problem, and makes sure he or she isn't a jerk.

Clothing Design- Sasha's main ability is designing clothes. Her aunt taught her how to do this. Over the years she progressively becomes better at this skill. As of now, her skills got her accepted into Alskora College. All of the outfits she creates are what viewers design as "magnifique"

Modeling- Of course, along with designing clothes, comes modeling for clothes. She has competed in lots of beauty pageants, but only made it to the Top 4. As of now, she is a judge for the beauty pageants and Fashion Festival.

Skiing- Sasha also has shown great skill in skiing. Her main two events are Molgus and Aerials. During her Alpine Skiing, she isn't very fast, same as for the Ski Cross. Slopestyle and Ski Jumping are okay for her, but in those two events, she kicks butt.

Oboe Playing- She also has a good skill in playing the oboe. At first, since she was a beginner, nobody, not even she liked how the oboe sounded, but now, it's a magnificent sound that everyone enjoys. She sometimes plays duets with her on the oboe and Alexis on the flute. Sometimes, they might add Lina with her guitar, and/or Maranda with her clarinet.

Acrobatics- The reason why Sasha has such good Moguls and Aerial Skills is because she was trained in acrobatics. This involves her being able to perform difficult trapeze tricks, trampoline stunts and other kinds of floor stunts.

Flight- Sasha has the amazing ability to fly with her ears. This runs through the family and both her and her sister are good at handling this ability. She flies at pretty far distances and also at a pretty fast pace, but she can't really fly higher than only a couple ten thousands of feet.

Nature Manipulation/Chlorokinesis- Sasha knows chlorokinesis. Her mother taught her this talent, and as of now, she could handle these skills on her own. She sometimes grows plants to use as an accessory or even part of an outfit for an ensemble.

Alexis Petals- Alexis is Sasha's younger sister. Being the older one, she is extremely protective over her. They love each other dearly and love to spend time together as sisters. Sometimes, Sasha and Alexis have music duets; Sasha on the oboe, and Alexis on the flute. After moving to Alskora City, Sasha plans to return to Mariala City to spend time with her little sister.

Sally Acorn- Sally and Sasha are good friends. Both of them go to Alskora College and have dorm rooms not very far away from each other.

Blaze the Cat- Blaze and Sasha are also good friends. They don't really see each other that often, unless Blaze visits her.

Lina the Hedgehog- Sasha and Lina are best friends. They have been friends ever since they were really little and now share a best friendship. They used to always hang out, and now are cities apart.

Maranda the Hedgehog- Maranda and Sasha are also best friends. They have been friends ever since they were little and have a good friendship. They used to always hang out before college.

Daniel "Danny" the Hedgehog- Danny and Sasha are very good friends. Both of them are judges for beauty pageants and fashion contests. Apparently, Danny is dating her sister.

Christina the HedgeCat- Christina and Sasha are pretty good friends but they don't really know each other well. Therefore they didn't interact a lot back then.

Michelle the Cat- Michelle and Sasha are good friends as well. Michelle wanted to work with her in acrobatics. With the help of her training, her skills were amazing.

Mimi the Cat- Sasha hates Mimi as well as she. She sticks up for her sister when Mimi picks on her and takes authority and responsibility over her, being older.

Krys the Alicorn- Krys and Sasha don't really know each other. They interact a lot and likes her fashion ensembles. Krys is a fan of her.

Gabriella the Cat- Gabriella, yet again, doesn't really know Sasha. They didn't talk a lot back when she was living in Mariala City. She thinks Gabriella's voice is beautiful.

Retrieved from "https://sonicfanon.fandom.com/wiki/Sasha_Petals?oldid=1808569"
Community content is available under CC-BY-SA unless otherwise noted.