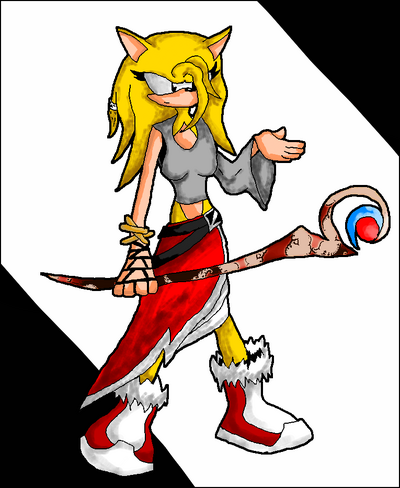 Alignment: Whatever protects her friends and the people she cares about.

Socioeconomic Status: Not rich, not poor, she gets by.

Physical Appearance: Sasha has yellow fur, long, flowing spines and a small ponytail at the back of her head.

Body Structure: She has a slim, curvy body categoristic of a young woman.

Attire: Sasha wears a tight grey top with one long loose sleeve on the left arm. Upon her right arm are several gold coloured rings an a net like glove. She has a red dress with a "double belt" and white trims. She has red and white boots with faux fur lining the top.

Gear and Accessories: A staff with two jewels embedded, one spherical and one cresent moon shaped.

Intelligence: Sasha is a confident, intelligent woman. She's has both a creative and analytical which comes in use for defusing complex situations with her magic.

Personality: Sasha is the most level headed of the group, the "Straight Man" you might say. She is mature and capable with money, unlike the majority of the team. She feels her friends are the most important part of her life, to the extent she rents out one of the rooms in her flat for a very small fee to Mitch and Dante. She can be quite determined when something she fights for something she truely believes in.

Hobbies and Interests: Sasha loves to sing, which is the reason she to the job in the restuarant, so she could sing up upon the stage. While she is straight she has great interest in the LGB scene sparked to life by Danny and Dante.

Physical Advantages: Sasha trained in acrobatics as a child, but other than that she has no real physical advantages.

Mental Advantages (in combat): She has learned how to control magical forces, mostly via her staff as she does not have a large amount of mana attracted to her, so she requires the staff to focus it. Her both analytical and creative mind lets her find effective strategies for defeating opponents.

Physical Disadvantages: Sasha's melee fighting styles are non-existant, as a result if she is seperated from her staff she is only capable of very minor spells.

Abilities: Sasha has been taught to manipulate the mystic force of Mana into magical spells by a woman named Ebony. She is capable of a large variety of spells using her staff. However without her staff she is capable only of weak wind magic, however this also includes flight.

Energy Sources: She uses Mana, the force that grants life in the world of Lunar Blue, to power her spells, which originates from the Goddess of Mana, Empyrea.

Intended Role: Originally intended to be Danny's girlfriend before I came out as gay, naturally she was no longer needed as a girlfriend character and she fell back into a small role. However recently I re-imagined her into her current self, one of my four most main characters. In this latest incarnation she seems to fit the role of the sensible character who tries to stop her friends from rushing in unprepared.

Incorporated Concepts: Magic, which was a huge factor in one of Danny's previous incarnations, when that Danny no longer existed Sasha sort of inherited the magic angle.

Inspirations: Originally Amy Rose, but now she shares no similarities with Amy.

Trivia/Miscellaneous Information: Her physical design is still very remenicent of her original self, she has however been aged physically and mentally.

His Theme Tune is "Atomic" by Blondie

Retrieved from "https://sonicfanon.fandom.com/wiki/Sasha_Brandford?oldid=10607"
Community content is available under CC-BY-SA unless otherwise noted.