The day my mother was killed was the saddest day of my life; but I knew I couldn't just be a baby and cry about it. I had to grow up and stand up for myself. That day... I stopped being a child. 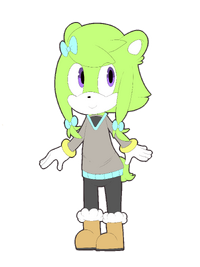 Sarah the Cub (サラ·カブ Sara za kabu) Sarah is a fictional, anthropomorphic cub owned by Nikki-Kaji. She is one of Nikki-Kaji's youngest characters, but is not afraid to take risks and stand up for herself.

Sarah is a 9-year old baby green bear cub. She has purple eyes, which is actually a mixture of her parents' two different eye colors, and makes her distinctive from other bears. She is short and does not weigh much, only 2'4" in length and weighs 41Ibs, which is due to her young age. Sarah's fur is, as people have told her, very soft and cuddly. She has a cute bang that sweeps over her forehead and doesn't cover her eyes much and two strips of hair that come to the front and flow over her shoulders. She also has a fluffy, curled tail.

In the beginning, Sarah lived with her mother, Evergreen, and father, Zachary, on Oxelvic, a beautiful island far out in the ocean. Her mother and father moved there before she was born, hoping that they'd be able to provide a wonderful life for their daughter. They bought a house in Silo City, where lots of other people lived. Evergreen became a nurse at Silo Hospital, and Zachary became a police officer.

When Sarah first started school, she was very shy and quiet. Her best friend was a teddy bear she received from her mother a few years back, which she carried around everywhere with her. People would start to tease her about it once she entered the third grade, but she didn't care. She felt safer around Aiden (Her teddy bear's name), and would always take care of him.

When President Alan James passed away and his son, Corvo, went into power, everything changed. He became a dictator, and people quickly began leaving the island. Soon, Corvo stopped allowing people to leave, Sarah and her parents not being able to leave. They tried to flee from the city along with others who were tired of Corvo, but were caught. Trying to protect her, Evergreen and Zachary resisted, allowing Sarah to flee from the security robots. However, when she ran, Sarah's mother was shot dead. Sarah was frozen with shock, staring in horror at her mother's bleeding, motionless body. Quickly, her father picked her up and began running, Sarah crying as she knew that was the last time she would see her mother.

Sarah and her father ended up hiding out in an abandoned factory, which was right at the border of the city. Scavengers had already raided the place, and there was nothing left. Her father would have to go out almost every other night, leaving Sarah by herself along with a gun, just in case she had to defend herself. Things were okay at first, until one night Sarah's father didn't return from a scavenge. Days passed, and he still never showed up. Sarah was left alone with little food, a little bit of medical supplies, and a gun she didn't know how to use.

Sarah started off as a quiet, polite child who wanted to stay out of trouble. She didn't have many friends at school, and instead spent time with her stuffed bear, Aiden. When people teased her about the bear, calling Sarah a baby and such, she would sometimes get hurt by it. However, she does not care about their opinion, and still has Aiden to this day, carrying him around as a symbol of love.

Note: I will probably be getting rid of the powers
Sarah has discovered her power to manipulate natural things in the world, like leaves, grass, flowers, ect. She can either take them from around her, or generate them in her hands if she focuses hard enough. At first, it just started off as manipulation of leafs and petals, being able to manipulate the way they flow and created nature shows for personal use. However, Sarah does not know about her true capability. As she grows and changes in the future, she is able to fully use the power of chlorokinesis.

Add a photo to this gallery
Retrieved from "https://sonicfanon.fandom.com/wiki/Sarah_the_Cub?oldid=1694543"
Community content is available under CC-BY-SA unless otherwise noted.