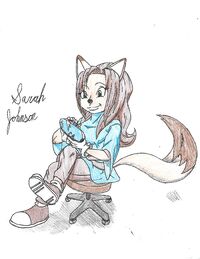 Sarah is a sassy soldier, her boldness and tenacity have allowed her to power through numerous demons; and do so with a smile on her face, some of these demons were more powerful than her. She can be playful at times as well, cracking jokes most of the time especially in tense situations so that she and her teammates don't lose face. Sarah is also very confident and expressive, few things get her down; this extreme flamboyance is the light in the darkness for her allies especially those in class Neo Dark.

Never knowing her mother, she had a mutual understanding of Cabara's feelings as he never knew his dad. As they grew, so did their friendship, with hopes and dreams of freeing the planet Mobius from the legion of demons swarming it, they decided they would join G.U.N.'s Demon Slayer Organization. Once a secret branch of G.U.N. that dealt with the legion in the shadows, was now in the public eye since the world was taken over. When they finally became members of the D.S.O. they quickly became famous throughout the entire organization, the best team in Neo Dark consisting of Cabara, Bronx, and Sarah who leads the flight formation of Team Cabara. Growing up and fighting demons together, Sarah and Cabara have become very attached to each other; but one is still unaware of the other's true feelings for him/her and Bronx is left chuckling in the background as he watches it unfold.

Through chaos experiments, Sarah gained a connection to the Chaos Force, allowing her to control chaos energy for a variety of effects like projecting energy blasts and constructs, manipulating space-time, augmenting physical capabilities, and more.

She has control over her aura allowing her to fly, project energy beams and constructs, augment physical capabilities.

Sarah has immense physical capabilities like strength and speed, and her above-average agility which she uses to perform parkour tricks.

Sarah is well-versed in armed and unarmed combat, she is highly skilled in capoeira, jujitsu, and judo; she can also use whips, swords, and firearms with great efficiency as well. Though she is proficient in hand-to-hand combat, she prefers to fight using long ranged weaponry. Specifically her favorite laser pistols Bara and Ca. She can hit multiple targets moving at blurring speeds. She can even read a combat situation quite well and adapt accordingly between close and long range combat. When it comes to close quarters fighting she favors a Capoeira style.

She is very flexible, she can adapt to most situations fairly quickly and she showcases this with her resourcefulness.

Sarah can fly using her aura.

She can detect auras within her vicinity.

Sarah has such mastery over her aura, she can conceal it; effectively hiding her presence from others.

she can infuse her aura into her body and objects to increase their effectiveness.

Sarah's mental and spiritual condition can determine the effectiveness of her aura powers, stronger opponents can obviously overpower her and other spiritual and chaos powers can counter her own. She becomes less aware of her actions as Corrupt Sarah and if her body takes too much damage while the soul is out, she can no longer return to it.

Retrieved from "https://sonicfanon.fandom.com/wiki/Sarah_Johnson?oldid=1880239"
Community content is available under CC-BY-SA unless otherwise noted.