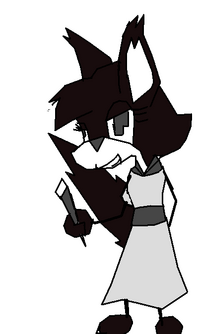 Sara is a black-ish brown coyote who wears a light grey dress with dark grey frills and a band.She seems to have sticks for legs and hands.She is often seen holding her wand.

Sara is a manically evil little girl who wants the world to be in black and white.She's apart of Elgantine's group to take over the world and is the only one in the group who wants world domination.Despite being evil,Sara still has good plublicity and is famous and rich.She uses her money to form new plans for taking over the world.She fakes being a 7 year old and is actually 28 mentally.She also fakes being nice around people.However,deep down she's actually a pretty kind and caring person who wants attention out of fear of being forgotten.

Sara Winniefred Coyote was born normally like all other Mobians,until she found a magic wand that changed her life forever.The wand changed her physical appearance and kept her in the body of a 7 year old forever,or at least til' she dies.The wand changed her personality as well as her appearance,the more she was with the wand the more it's power started to corrupt her.One day she accidentley killed her parents out of fear of losing the wand to them.Everyone in her town got scared of her and banished her from the town.That's when a band of con artists took her in and used her in one of their shows.She was able to turn things black and white with her wand and it amazed crowds.Eventually Sara left the con artists and decided to make her money on her own.The wand,at the time,started to make her want even more power.She joined Elgantine's group thinking they would help her take over the world,but it seemed fruitless as none of them have ideas yet and mostly none of them want to take over the world.She still remains in the group only to use them as protection.

Sara's other form
Add a photo to this gallery

Sara's only weapon is her wand.

Sara cannot die from natural causes,but can die of other reasons.

Sara is still to physically young to fight.

Retrieved from "https://sonicfanon.fandom.com/wiki/Sara_the_Coyote?oldid=1510876"
Community content is available under CC-BY-SA unless otherwise noted.