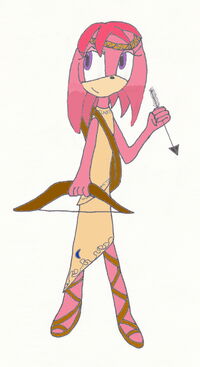 Image Caption Here
Basic Info
Name
Sara-su
Nicknames
Sara (call her anything else and she would probably just glare at you until you said her correct name)
Age
18
Gender
Female
Species
Echidna
Alignment
Hero
Relationship Status
single
Appearance
Color
Pink
Description
She usually carries around her quiver and bow, and she dresses in the Minoan style with their symbol, the dark blue crescent moon
Biographical Info
Current Residence
Minoan city in Soumerca
Relatives
Julie-su (sister)

Sara-su is a former Dark Legionaire and Julie-su's sister. She now lives with the chinchilla tribe and is one of their best warriors, even though she is an echidna. She also often works independently. All of her ties are to the chinchillas, and she has a hard time trusting anyone else. She is also an expert archer.

Sara-su is Julie-su's older sister, whom Julie-su still doesn't remember. When she found out about Lien-da and Kragok's plan to kill her mom, she got desparate and went to the Knuckles tribe for help, but of course got attacked on sight. By the time she got back, Lien-da and Kragok had done it, and she was told by Dimitri that Julie-su was gone too. As Julie-su was really young at the time, she has no memory of her sister. With no reason to stay, she left the continent altogether.

On wandering a little-known region of Soumerca, Sara chanced upon a cave tunnel that led to the underground nation of Mernoa, a chinchilla people. On seeing her, the chief of the nation wanted to expell Sara-su immediately, but the chieftain's daughter, Semoya, took a liking to this outsider, convincing her father to let Sara stay and becoming a best friend to her. Later Semoya told Sara-su why the Mernoa people were so hidden. Many years ago, they were allied to the echidna people to take down one of the biggest threats Mobius had ever seen, the Dark Tribe. The battle was finally won when the echidnas unleashed the chaos force in a huge blast that destroyed the Dark Tribe's ships for good. It worked a little to well, though, because the recoil from the blast destroyed the Mernoan city as well. Feeling betrayed, the Mernoans built a new city in an underground ecosystem, never to have contact with the outside world again.

Roleplay: Quest for the Emerald

In this roleplay, Sara-su joined the heroes on their search for the eighth chaos emerald. This is her first appearance in the outside world since she joined the chinchillas. She didn't intend to leave initially, but Master Hades had attacked a chinchilla fishing village outside the cave during his search for the chaos emerald. Eager to get her hands on him and curious as to his motives, Sara-su went off after Hades.

Revenge of the Dark Tribe

This is one of my upcoming stories. During the course of the story, Sara-su will show up again and end up meeting the Chaotix and Julie-su. It will be her first time seeing her sister Julie-su since the Dark Legion days and realizing that she is, in fact, still alive.

Sara-su can oftentimes be headstrong, hardheaded, stern, and untrusting. However, she is really kind when it comes to the ones she cares about, namely her friend Semoya and the other chinchillas. Semoya is probably one of the only ones she ever smiles around. She is serious about her word, and doesn't want to let anybody down.

Since joining the chinchillas, Sara-su started training in archery and has since become quite accomplished in the skill. She does also have some cybernetics (I forgot about them when drawing the picture above), but she rarely uses them. She is also good at hand-to-hand combat.

Retrieved from "https://sonicfanon.fandom.com/wiki/Sara-su_the_Echidna?oldid=1662488"
Community content is available under CC-BY-SA unless otherwise noted.