"I have lived alone in this island for years and I will live here for many more to come. I'm not interested in anything you or the other islands have to say so do me and my clan a favor and leave for you have no further business here."
—Sapphire

Sapphire the Echidna(サファイア·ザ·エキドゥナ Safaia· za· Ekiduna) is the princess of the Blue Echidna Clan and last blue Echidna from the Sol Dimension.

Sapphire was the princess of a clan of blue echidnas in the Sol Dimension that lived on a small island, conveniently called Blue Echidna Island, not too far from Southern Island. She helped run the clan along with her father and also acted somewhat as a healer also. Since the clan was typically very hostile to tresspassers and the other islands, each year Sapphire and her father traveled to strengthen peace treaties with the other islands and promote trade between them.

All things on the clan's island were peaceful and prosporus until one year a fatal epidemic came to the island, killing all but Sapphire, her father, and some lucky clanmates- but they soon perished and left Sapphire alone on her own. Once the last clanmate left her, Sapphire immediately cut all treaties with the other islands in belief that if all her clanmates left her alone, the other islands should too.

Sapphire is a very independent girl as a result to living alone and is a proud girl. She believes that everything happens for a reason, even if the reaons is unexpainable. Due to her immediately cutting the treaties with the other islands, it is proven that she doesn't trust others unless they can prove that they can be trusted. Sapphire may be a tad hostile when meeting new people, but other than that she's very calm and is much like a pacifist.

Sapphire's game play would be very similar to Knuckles'. She would be able to glide and spindash/jump, but she is not able to climb walls. When attacking enemies, she does not jump into them. Instead she uses her laser pistol and shoots them. If an enemy is to big/strong to be taken out by one shot, she uses her taser to temporarily stun the enemy and shoots it multiple times until they are destroyed.

I Will Not Bow by Breaking Benjamin 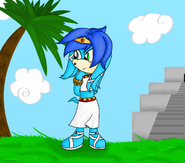 Sapphire in her princess attire

Chibi Sapphire
Add a photo to this gallery

Retrieved from "https://sonicfanon.fandom.com/wiki/Sapphire_the_Echidna?oldid=1798891"
Community content is available under CC-BY-SA unless otherwise noted.