Sanna is a female hedgehog who was born on earth and became a sweet, and friendly person. She has flame powers and combat skills however, she is having trouble on controlling her powers and try to concentrate to build up her powers. 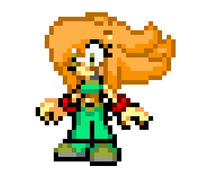 Writing in her diary.

Proving herself that she is the strongest.

Going to the beach. (sometimes)

Ice Crystal. (to a degree)

Pride the Hedgehog (her father)

When everyone thought she was a suspect.

When people reads her diary.

Going in to dark caves.

Getting bit by a poisonous snake.

Her clothes gets really dirty.

Seeing her friends in danger.

When anyone try's to capture her.

Getting her tree house destroyed.

5 years ago Sanna's father name pride lock up her in GUN HQ because pride said she is far too dangerous to be in the outside world with other people. She can controls her flames with her red rings on her 2 wrist called the fire of hate. She been curse with those rings on her wrist for 5 years and she has the power to cause massive earth quakes and she is more powerful then any other beings that she face and she is from the underworld. She sometimes can't control her powers right, and she sometimes lose controls of her powers. She can cause innocent lives of people in the world by using her flame powers. Her powers is much powerful that anyone can imagine. Plus, her insides is made of fire as well. During in the outside world, everyone say that they can't trust her and GUN HQ can't trust her as well because there were trying to go after her and take her back to the test tube from GUN HQ. Sanna hates lies when she gets very angry when she started to cause alot of rampage in the city. She sometimes said that she want to be left alone so she won't hurt anyone and she thinks no one likes her in that way.

Despite the fire of hate is merge to her DNA and attach to both of her wrist, she can control fire in her hands.

Fire Tornado is the ability to send her opponents flying and burn them alive.

This fire punch is so strong and it can also cause her opponents to take a lot of damage.

Fire-inferno is a very powerful blast and it can turn her opponents in to ashes witch make this attack a little bit stronger.

Sanna can create a fire disc in her hand and it can be used to slice her opponents in half.

The fire of hate is the only thing that keeps her alive and its attach to her skin. When someone try's to force it off on her, she will feel a little weak in her body in 5 minutes and it will cause her to die completely.

Retrieved from "https://sonicfanon.fandom.com/wiki/Sanna_The_Hedgehog?oldid=1875678"
Community content is available under CC-BY-SA unless otherwise noted.