THIS IS A CHARACTER THAT IS PART OF SANDRATHEPORCUPINE's SERIES!

Sandra is a care-free anthropomorphic light-blue porcupine, and is 12-years old. Her favorite food is blueberry muffins, with her least being potatoes. 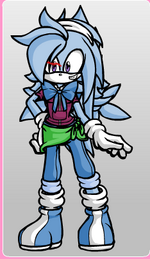 She has a passion for adventure, thrills, muffins, friends, and techno music. She has light blue quills, shoes, and body, with a scar on her eye.

She is calm, cool, collected, and passionate about others. She however tends to overreact about things and broods over the past, often which can lead her to be rude, selfish, facetious, and belligerent to foes and even friends. However, this is her dark side, so she tends to keep it under control. She is not afraid to yell at her friends to keep them from reacting badly to problems, which teaches a lesson to them, so Sandra can be looked at as an older sister/mother figure, despite her young age. This was a result from her childhood and being alone.

Sabre the Wolf (at times, mainly rivals and foes)

Scar the Porcupine (once friend and love interest)

Scar the Porcupine (now a foe and rival)

Silver the Hedgehog (when they were kids)

Sandra has super speed and super power. She can get stronger, faster or grow in any ability level by emotions (ex. Anger, Ambition---Power, Sadness, Happiness---Speed). Also, due to being a kid, sometimes they consume alot of energy, or she cannot always control them.

She also has a few super forms.

This form is the most power driven, violent, and mature super form, which is driven mainly by negative emotions, such as anger, sadness, failure, violence, and alot of others. Sandra has the tendency to yell, curse, and fight the most in this form. Due to this, it uses up almost of Sandra's energy; the first time she used it she was in a hospital for 1 week, almost dead. However, due to her friends support and hope, she was able to survive. She only uses this form in emergencies, however cannot always control it because of anger.

Alot like Demon Sandra, this form is power driven, however she has more control (sometimes) in this form. She mixes the hunting and sneakiness of a vampire and the power and gymnastics of a werewolf(such as jumping pole to pole).

"THIS is what I'm talkin' 'bout!" When Sandra does something right or 'awesometastic'.

"And here's more from the evil doof who won't shut his yap..." Sandra talking about Slythe's advertisement on TV.

"I do what I want, WHEN I want, for any reason. So I feel like trashing your base, right now, 'cause I WANT TO!" Sandra talking to Scar and Slythe at his base.

"Whoever said kids couldn't be heroes?"

"How can YOU be my father? No one likes you! I don't like you! I'm not one for war, despite my fighting level and reign against evil, unlike YOU!" Sandra yelling at her father.

"Why am I a legend? There's nothing special about me!"

"Hey, you ain't half-bad! You can join our team!" Sandra complimenting Scar's abilities.

"I know its hard to realize that we're here for only a short time. But thats why we gotta live life to its fullest!" Sandra on Taffeny's birthday.

In the Sandra comic series, her adventure is largely widened, to extra quests, romance, and action. Sandra's character gets more serious throughout the comics, however has a part that stays true to her normal self(wise, humorous, friendly). However this is just an effect from her life story.

Sandra was revealed to be an orphan since the age of 2. She was also emotionally abused at an orphanage due to her character and issues(shown to be dyslexic and color blind to the color red), so she ran away to live in the wild. She then met Seraph and his team, having new friends Shelly, Candy, and Malina. Later she is recruited as the new leader of the Peace Pursuers. They have an underground hideoout named Dirt Ditch. They also meet Secret the Fox by rescuing her from being captured by Sabre, a worker of Slythe. They also meet Striker the Bat, June the Armadillo, and other characters.

Raid of Slythe's base and a New Makeover

In an issue of Sandra, she and her team raid on Slythe's base. They get to the core of his base, only to find Slythe and his minions, Sabre, Metal Sandra, and others. They then split up, having Sandra, Seraph and June against Slythe, and everyone else against his henchmen. It was an easy fight, until Slythe unleased a shadow aura sword against Seraph and June, leaving Sandra distracted and defenseless. Slythe then hit Sandra; even though it did not kill her, it severely hurt her, and gave her a massive scar on her right eye. Sabre and Metal Sandra were defeated so they retreated. The rest of the team saw the scene, so with Seraph leading them, they rampaged on Slythe and battled him; they won and rushed Sandra back to their base.

Later on, everyone gets a new clothing/style makeover, from being in a competition and winning it(everyone picked a prize, this one was Taffeny's), such as shirts, pants, accesssories, shoes, etc.

Retrieved from "https://sonicfanon.fandom.com/wiki/Sandra_the_Porcupine?oldid=1038175"
Community content is available under CC-BY-SA unless otherwise noted.