"Seek the Totem. He will help you stop the Storm of Evil."
—Michael speaking to the Squad about Samu and the upcoming battle with Infinite, The Storm of Evil

Samu Komm is a male Totem Kommo-o who will make his debut in The Storm of Evil. He is the current Dragon-Type Totem Pokemon of Alola, despite his status as a warrior of Rogue Squad. Samu is the former leader of a now-defunct group of refugees known as the "Kommonity" that lived not far from the ruins of High Mountain City. He is also the adopted father of Simon Komm, a young human boy who lost his home and was separated from the refugees from his city because of Infinite. 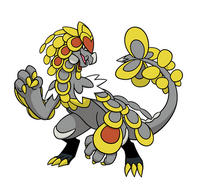 Samu is a huge Totem Kommo-o and thus is twice the size of a regular Kommo-o. As such, he resembles an absolutely massive anthropomorphic light gray dragon with huge four-fingered hands, dark gray feet with three yellow claw-like toes, and a long tail with huge scales on it. Armored scales cover his body that he can jangle around to make noise and use for the attack Clanging Scales(Kommo-o's signature move). He also has tough scales dangling from his head as well as four more on his throat.

Samu is proud, tough, stubborn, and fiercely loyal. When he is protecting someone, he will do so with his life if he needs to. This is most apparent with the human boy he's taking care of, Simon Komm.

Before the Series: Samu's past is largely unknown. Because of his huge size, Samu became the Totem of his territory, taking an unusually large Jangmo-o named Mo as his apprentice(with Mo later evolving into Hakamo-o). During the Coming of Alola, Samu moved to the Storming Base, becoming a warrior of Rogue Squad under Silver's leadership. Like many warriors, Samu disappeared when the Base was destroyed.

The Storm of Evil: Samu appears when the Storm Squad find themselves traveling through the ruins of High Mountain City. When they are attacked by Infinite's replicas as the evil jackal tries to corner them, Swift, Pebble, and Aria fight them, and are helped by a Noivern and a Jolteon-revealed to be Nomis and Thistle. The two lead the Squad back to where they now live, and meet Samu and his adopted son Simon-a human boy Samu rescued and is now taking care of. Samu is initially reluctant to take his "Kommonity", the group of Mobian and Pokemon refugees he is keeping safe, into the outside world for fear of encountering any trouble(especially from Infinite), but is talked into it by Thistle and Simon. Samu leads the group after the Squad and take them home to the Storming Base. He later participates in the final battle, easily knocking aside Infinite's replicas with wide sweeps of his arms and tail thanks to his huge size.

Samu's Ability is Bulletproof, which makes him immune to certain Bullet, Ball, and Bomb Moves(like Bullet Seed and Shadow Ball). Additionally, with his massive size comes immense physical strength. Samu's strength rivals that of Knuckles, though his is more obvious due to his truly massive size.

Despite his huge size, Samu has figured out how to run fast, able to keep up with nimbler characters like Rex and Pebble. Also, like all Kommo-o, he can use the noise he creates by jingling his scales for various means, usually for attacking(via Clanging Scales or Clangorous Soulblaze) or calling others to attention.

Being a Dragon-Fighting-Type, Samu is 4x weak to Fairy, and 2x weak to Flying, Dragon, and Ice.

Simon Trapp, now known as Simon Komm, is a human boy Samu rescued from Infinite in the wake of the masked villain's attack on High Mountain City during the Great Rebellion. Because of his big heart, Samu chose to take care of the boy in the absence of his parents, adopting him as his son.

Though their full dynamic is unknown, Samu has a serious dislike of Infinite, due to losing the Storming Base because of the masked villain, and the fact Simon lost his own home as well as his family. Samu mentions that he'd love to crush Infinite if given the chance.

Samu is the first known non-human to adopt a human in any way.

Retrieved from "https://sonicfanon.fandom.com/wiki/Samu_Komm?oldid=1800579"
Community content is available under CC-BY-SA unless otherwise noted.