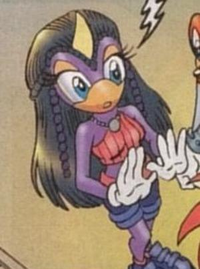 Salma is the eldest of the three sibling of Espio the Chameleon. She was originally from the Light Mobius Timeline and was among the others who survived the time alteration. When King Shadow destroyed Lien-Da's spacial armband, causing Rutan to be altered by the timeline Salma grabs him resulting in her being affected as well. This changes her life completely.

After the alteration and joining the Neo Chaotix she changed into a armored ninja uniform although maintaining the colors of her previous clothing. She also wear gloves and boots similar to her father's, although her's was modified. She also have three earrings on each of her ears and a belt on her left leg holding several vials, each containing a unique liquid/powder for multiple use like making poison or smoke bombs. There are three shuriken holsters strap on her right leg. A belt holding a pouch, combat knife, pistol, and three grenades. Lastly there are two swords strapped to her back.

She later wears a mask covering her lower face after Rutan cuts her throat taking her ability to speak and special computerize goggles.

In the Light Mobius Timeline she was cheerful and social.

In the New Genesis (MXYL) Timeline her personality remained the same, although she displayed some fear whenever in a fight or mission, although she originally lived in a time of peace and never fought in a battle. However after mission after mission her confidence increased and became a reliably combatant.

Before her reunion with Rutan, she maintains her belief there is some good in Rutan despite the horrible atrocities he committed, believing that the two meeting each other may restore his memories of the Light Mobius Timeline. However to her shock and horror, Rutan revealed that he retained his memories and states he prefer his current life although he admitted he plans to destroy Light Mobius in revenge for what happened to his mother. To prove his point he attempted to kill her, while Salma survived she lost her ability to speak, thus ending her relationship with Rutan.

After the Reunion Incident her personality once again drastically changed becoming stoic and composed, constantly appearing emotionless and indifferent to most events, although most of it was due to her face being covered. Showing a very no-nonsense attitude, she is straight to the point and speaks (by sign language) no more than necessary. This got those who knew her like Lara-Su or Juanita to see her as a different person.

During her final mission before losing her voice, she fought remarkably well against Legatus Rutan and successfully deliver deadly blows, although Rutan wasn't taking her seriously and was caught by surprise of her increase of strength

After the Reunion Incident went through intense training to the point she became the second strongest of the Neo Chaotix, surpassing both veterans Blaster and Magi-Na, much to the two's shock. Despite her rather slim appearance she is deceptively strong as she was able to life up a steel beam and swat aside a tank with her hand, though she admits physical might is not her specialty. She also possess great durability as she took powerful blows from Pac's blows with minor injuries.

Being a chameleon, Salma can camouflage herself to her environment. Her camouflage is so effective that he is essentially invisible while remaining still and moving. Salma is said to be the first and only chameleon to perfect her invisibility, as neither Rutan or Pac were unable to detect her even in close range. Although it turns out her invisibility wears off if exposed to extreme light like a flash bang.

Salma's invisibility is utilized to perform a trick known as Stealth Teleport which can only be done by Salma. In reality, after she turns invisible she multiply herself into twenty. The true nature of teleportation is that the engaging Salma simply cloaks itself while another Salma uncloaks and attack. This trick however has a restriction in that it cannot be used when an uncloaked Salma is surrounded. Since the clones are all one and the same, they can do mental communication to each other.

Originally Salma lacks any connection to the Chaos Force, however her body unknowingly absorbs Rutan's Chaos Energy when she touched him during the alteration. The Corrupt Chaos Energy proves to be incredibly poisonous to Salma, but not by a life threatening way. It instead cause damage to her mind to the point to going berserk attacking anything in sight.

This was cured after the Reunion Incident when Pac does a transfusion of his pure Chaos Energy negating the negative effects. This allows Salma to enter her Enerjak Forms without losing her mind.

Salma skipped Basic Enerjak Mode and instantly transform into Complete Enerjak Mode. As with many other Enerjaks, her skills and strength increase greatly, while the armor provides great durability. Salma can use infuse her weapons with Chaos Energy making them extremely powerful and dangerous as a single Chaos infused knife cut through Rutan's armor. 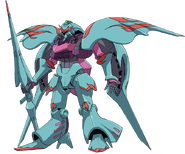 Pure Mega Enerjak Mode
Add a photo to this gallery 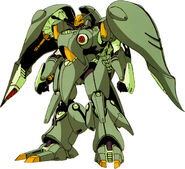 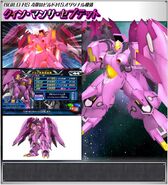 Pure Enerjak Titan
Add a photo to this gallery

Retrieved from "https://sonicfanon.fandom.com/wiki/Salma_(New_Genesis)?oldid=1853170"
Community content is available under CC-BY-SA unless otherwise noted.