Princess Sally Acorn is an alternate version of Sally Acorn who appears in the upcoming action-role playing video game Sonic Freedom and its related media. Sally is the second and youngest daughter of King Maximilian Acorn and Queen Alicia Acorn, sister of Elias Acorn and princess of the Kingdom of Acorn. She serves as a deuteragonist in Sonic the Hedgehog and Sonic Freedom. She is voiced by Kath Soucie. 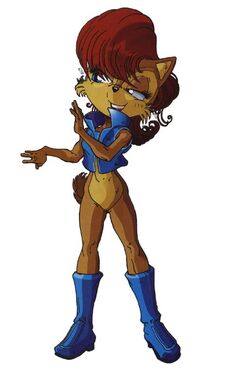 Born and raised of royalty, Sally learned from a young age the responsibilities of running a kingdom and providing for its people. In spite of her royal upbringing, Princess Sally has chosen a life of hardships and struggle over the luxuries and convenience offered by her status. She is respected by her people and held in high regards for her altruism and selflessness, always placing herself and her needs last in order to fulfill the priorities of others. She is the leader of the now disbanded Freedom Fighters, a group of youths who, driven by their love for freedom, fought against the tyrrany of Dr. Eggman, indifferent to the fact that they were only a few. In battle, Sally never took a step back, always risking her life for her people, her friends and her beliefs. Nowadays, Sally spends her time mostly with administrative work as member of the Council of Acorn.


Her highest virtues are humility, lack of arrogance and sophrosyne. A strong-willed woman with high sense of justice and morality, Sally is a calm and collected individual, but can become increasingly sentimental and succumbed by her emotions due to her philanthropic nature. While everybody around her believes that the Xorda are undefeatable in any way, Sally still holds strong to her ideas and belief that the Xorda can be defeated, striving to remind others not to give up on their principles and always fight for what they believe in.

Sally met Sonic when they were both children and they befriended each other. Nevertheless, it was their adventure together that drew them closer and made them a team. While Sonic serves as the team's legs, Sally acts mostly as the mind, as her intelligence and her skills as a tactitian allow her to possess a higher understanding of things.

Throughout the years, Sally's appearance has remained largely the same. Her hair are now slightly longer, reaching down to her spine and more messy. She wears her trademark blue sleeveles jacket and pair of blue boots. She is 26 years old.

Sally's gameplay mirrors that of Sonic, being a staple character that is easy to learn, suited for beginners. She has average strength and stamina, more than average speed and excellent agility and recovery. She can combo her attacks very quickly as well as cancel them. Her main drawback is her low health and poor defense.

As a tactitian, Sally unleashes her full fighting potential when she fights as a team; she is weak when she fights alone. Thefore, utilizing other team mates' abilities such as assist attacks, assist skills and special assist attacks allows Sally to flow much better in battle. When controlled by CPU in battle, Sally tends to interact with other team mates the most out of all characters, often intructing the player about their strategy, the party's status as well as offering the player a chance to perform a special assist attack with her.

Sally equips daggers as her primary weapon and can equip firearms as her secondary weapon. Daggers are excellent for close-ranged combat while firearms allow for distant, defensive-type gameplay. Nevertheless, Sally can fight without the use of any weapon, similarly to Sonic. In such cases she battles using a combination of acrobatic manoeuvres and martial arts.  Sally's attacks do not inflict any status ailment per se. However, the infliction depends on the type of dagger she uses. She is especially weak to the "soaked" ailment given that she is a furry animal, meaning that when she fights in water areas for long time her attacks and speed become slower.

Retrieved from "https://sonicfanon.fandom.com/wiki/Sally_Acorn_(Sonic_Freedom)?oldid=1869509"
Community content is available under CC-BY-SA unless otherwise noted.