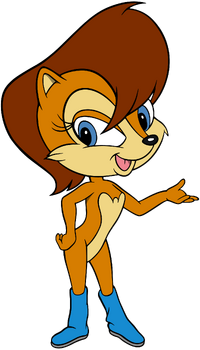 Sonic, they’re going as fast as they possibly can! If you think you can do any better, then show me!

Princess Sally Acorn is the princess of the Kingdom of Mobius. Well...at least she was before Dr. Ivo Robotnik took over. Now, she serves as the leader of the Knothole Freedom Fighters alongside Sonic the Hedgehog, just as she did in her official appearances. To see what else she's done, click here.

Sally was the daughter of Maximilian Acorn & Alicia Acorn, king & queen of Mobius. As a child, she & her parents visited Angel Island several times, meeting and befriending Knuckles the Echidna. When she was six years old, King & Queen Acorn were ousted in a mad coup d'état masterminded by Dr. Ivo Robotnik, a mad scientist who had assisted the Mobian Army during the Great War. In the process, the Royal Family was banished to The Void and the majority of Mobius' citizenry was roboticized. Sally was one of the lucky ones, however, and she fled to the Great Forest, where she hid out at Knothole Village and ended up leading a gang of Freedom Fighters at age ten. The rest, as you know, is history.

Sally's personality is pretty much the same as in her official appearances, often clashing with Sonic's free-spirited & joking personality. Nevertheless, she cares about him very much, and gets very worried if he disappears or is incapacitated for long periods of time.

Sally looks just the same as she did in SatAM & the Archie comics. Her clothing is completely up to the reader's imagination.

Like her official counterparts, Sally can't run as fast as Sonic, nor can she jump as high as him. However, she has great acrobatic skills & is skilled in martial arts. She is also a top-notch strategist.

Sally receives a notice that Dr. Robotnik is constructing a new mech factory in Eggopolis, so she informs the others about it. While Sonic, Tails & Knuckles go ahead, she accompanies Antoine, Bunnie & Rotor. However, she gets captured by SWATbots, tortured and imprisoned by Robotnik. In attempting to escape, Sally ends up getting teleported to Stalag 13. Here, Colonel Hogan informs her about a top-secret tank factory that the Germans are building. Unlike Sonic, she is eager to stay and help Hogan out. She ends up showing off NICOLE's functions to the Heroes and partakes in LeBeau's fine cooking.

While Sonic goes to the tank factory, Sally stays behind with Antoine, LeBeau, Knuckles, Kinchloe & Rotor, watching for trouble. When Shadow conducts a surprise inspection and finds Sonic missing, he blames Sally for his disappearance and hits her a few times. After Sonic gets back and everyone is getting ready to go, she hits Shadow right back. Once she returns to Mobius, Sally – along with the others – destroys the mech factory as she originally set out to do.

Sally looks at Sonic with disdain when he brings home a 1978 Yamaha YZ400 motocross bike. She criticizes it for being noisy, dirty and pointless. Nevertheless, she lets Sonic keep the bike. Later, when Sonic disappears, Sally begins to get worried, and her worries are confirmed when Silver visits and brings the Freedom Fighters to the future. Here, they learn that without Sonic, the whole world will be in ruin except for Eggopolis. With this in mind, Sally initiates a search for Sonic once she & the other Freedom Fighters return to the present. She & Bunnie find the Blue Blur, who – unbeknownst to them – is a mere impostor.

Despite the fact that the impostor looks different and is more of a prankster than usual, Sally finds nothing wrong with him. Then, the impostor disappears again, and she becomes a bit suspicious when NICOLE reveals two possible locations for Sonic. Thus, she sends Bunnie & Antoine to find him. When they come back with news of his disappearance again, Sally sends Tails to look for him. Eventually, she locates Sonic, who turns out to be yet another impostor. When this impostor attempts to have his way with her, she fights back, causing him to get angry and turn into an angry, fire-breathing hedge-dragon. Luckily, Shadow & Blaze arrive to defeat it. Still, when Sonic comes back, Sally is angry at him for all the mischief that he (allegedly) caused.

Sally receives a distress signal from a group of Freedom Fighters in Kinto Village, so she looks for Sonic. She locates him not too far from Knothole, having a conversation with Shadow. When Sally informs Sonic of the message, he runs off, only to get injured in one of Robotnik's traps. She tends to Sonic's wound, but scolds him for running off so suddenly. Nevertheless, she's grateful that he's still OK. Sally makes a few appearances in Sonic's dreams, although one of them is just the clone Sonic in disguise.

The next day, Sally is a bit worried when Sonic doesn't wake up. However, she thinks nothing of it until she gets a call from the Chaotix. When they tell her that Dr. Robotnik is building a new superweapon, she gets very worried when Sonic still doesn't wake up. NICOLE informs Sally that Sonic has been injected with sodium barboxide, a deadly sleeping poison. She orders Tails to get some Mobian Dragonflowers for an antidote. In the meantime, Rouge gives her a spike that was coated with sodium barboxide. Test results show it to be the same as the one that Sonic stepped on. When Sonic wakes up, Sally gives him a big hug, but is interrupted by Amy. She initially scolds Amy, but Sonic tells Sally that he's just glad to have friends who are there for him. After the display of affection, she heads off to destroy the Atomic Decoupler with Sonic & co. Once again, she & the others manage to save the world.

Naturally, Sally is a huge fan of Super Changin' Muscle Rangers (Mighty Morphin' Power Rangers in disguise) and thinks Sonic is being immature about his hatred for the show. Later, when Ol' Blue comes to inform his friends about the kidnapping of the Muscle Rangers stars, Sally thinks Sonic has changed his mind and loves the show. However, when Sonic tells her about the kidnapping of the Muscle Rangers stars, she stops joking around and prepares for battle. During the rescue operation, Sally takes control of the Allosaurus Vord, and with the assistance of Sonic & friends, she defeats Eggman and rescues the Muscle Rangers. Afterwards, she expresses her admiration for Amy Sutherland (the actress who plays the pink Muscle Ranger) and goads Sonic into confessing how he feels about the show.

In this story, Sally & Sonic discuss whether it would be a good idea to give Dr. Robotnik a peace offering – namely, hotcakes. After Sonic fails, Sally concludes that maybe Robotnik was just in a bad mood, so she tries again the next day and also gets attacked. Luckily, she escapes. However, when Sally gets back to Knothole, she finds it deserted except for Sonic. When she questions the Blue Blur, she finds out that everyone left when he went out for a run, and the answer soon becomes apparent: Somebody got wind of Sonic & Sally's plan. She blames Sonic for their disappearance, but the Blue Blur contends that they were both responsible since they were the first two people to know about the plan. So, they go to Eggopolis to make sure that everyone's safe. With all of the Freedom Fighters having gotten out, Sonic, Sally & the gang return home.

Sally asks Sonic about his peculiar behavior a couple of times, but notices nothing overly suspicious. Later on, Sally is highly suspicious of Mephiles the Dark' presence in Knothole. Despite assurances from Sonic & Mephiles (plus some flirting on the Dark One's part), Sally wants to give Mephiles a lie detector test. This makes him very angry, and he accuses Sonic & Sally of plotting to defeat him again. However, Sonic convinces Mephiles to take the test. Sally uses NICOLE to conduct the test, attaching a wireless sensor to Mephiles' forehead. After going over the questions, she begins the test. Mephiles passes, and Sally finally forgives him, but she advises him to stay true to his word. As thanks, Mephiles kisses her hand.

Retrieved from "https://sonicfanon.fandom.com/wiki/Sally_Acorn_(BearfootTruck%27s_Universe)?oldid=1393325"
Community content is available under CC-BY-SA unless otherwise noted.