Start a Wiki
This is an article about Princess Sally Acorn/Mobius Redrawn, a character created by Konnichiku on 03/7/2015. 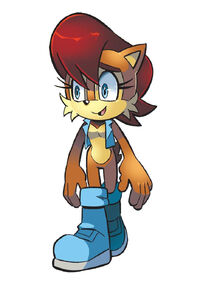 Sally Acorn is a fifteen-year-old chipmunk who is the princess of Knothole. She is friends with Amy Rose, Mina the Mongoose, and Sonic the Hedgehog.

Sally may appear deadpan, but she's really brave, daring, and free-spirited. However, she wants to do everything on her own and denies anyone's help, except for Sonic, Tails, Amy and Mina's. This makes her a bit arrogant, but she is still kindhearted and will provide anybody with information, as she has an IQ of 105. Her goal to share her knowledge with and educate people, as well as her wishes to inform people on the state of Mobius, is what led her to apply for a part-time as a news reporter, which was accepted. She is also friendly to Nicole, a lynx who she communicates with through a cell phone. She also keeps a list of rules which she pulls out in humorous situations. She acts as the straight woman to the hyperactive Amy, which sometimes gets them into fights, however they're shown to have good chemistry together, especially with Mina, who breaks up their quarreling usually.

Sally was born in Knothole. There she made friends with Nicole. At the age of 9, she found out she was a princess and a descendent of King Acorn. She also saw her brother Elias for the first time. When Sally turned 12, she moved to Central City on her own. She saw Nicole for the first time in years and exchanged phone numbers so they could call each other. Sometime later, Sally met Amy Rose and Mina the Mongoose. They discovered they had a lot in common, and made friends. Mina taught them to sing, and after they moved to Earth in 2008, they decided to start a band, thus forming ASM. Sally is a vocalist and lyricist. Their songs are based on the belief that friendships come before relationships, similar to the Spice Girls' songs.

Sally can use Chaos Control to warp to any place she wants. Her cell phone can also fire laser beams.

She is smart and is a scientific genius, building inventions for battle and for everyday use, just like Tails. She usually lends these inventions for Amy and Mina to use.

Sally can sing, dance, and swim. She also knows kung-fu.

Sally freezes if she is put in the cold for a long time, and burns if she is exposed to immense heat. She also can get hurt if she falls from a great height.

Retrieved from "https://sonicfanon.fandom.com/wiki/Sally_Acorn/Mobius_Redrawn?oldid=1868179"
Community content is available under CC-BY-SA unless otherwise noted.