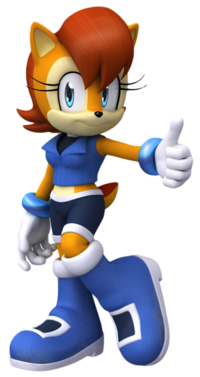 Princess Sally Alicia Acorn is a mobian chipmunk, the daughter of King Nigel Acorn, and the leader of the Freedom Fighters.

Sally is an anthromorphic chipmunk with brown fur, tan fur around most of her face, inside her ears, on her stomach, and on the bottom side of her tail, and a dark auburn stripe going down from her head to the topside of her tail. She also has dark auburn hair and light blue eyes.

For attire, she wears a dark blue vest, azure blue jacket, dark blue shorts with white trim, but and white boots, and white gloves with blue cuffs. As a child, she wore a blue-green Arabian-styled dress with matching curled slippers, white gloves and a golden tiara. Other outfits include an Arabian-styled dress much similar to her childhood attire worn for royal occasions and white pajamas with acorn designs all over them.

Sally was born to King Nigel and Queen Eleyna Acorn as their second born, 5 years after the birth of Prince Elias Acorn. As a child, she enjoyed a peaceful life in Mobotropolis playing with her father. One night, however, she was woken from her sleep by her nanny, Rosie, while Nigel's adviser, the man who became known as Dr. Eggman, betrayed him and threw both him and the royal wizard, Walter Naugus, into the Special Zone and proceeded to take over Mobotropolis, with Sally having to helplessly watch as her city was taken and she couldn't do anything about it. Sally was taken away to the secluded Knothole Village, where she and many of the other refugees continued to hide.

Shortly after, Sonic showed up and began taking on Eggman's forces. Inspired by his heroics, Sally and a group of her friends would form the Freedom Fighters and began taking the fight to Dr. Eggman. They managed to take back Mobotropolis and the rest of the Kingdom of Acorn and restored King Nigel to his throne. While Sally was worried that Nigel would try to take her away from her team for her own safety and but allowed her to continue to lead them, seeing all the good they have done.

Sally is strong-minded and very opinionated. With a logical thinking mind, Sally prefers to think ahead in most situations but is not without a playful side. Despite being a princess, Sally sees her title as one of duty and prefers to act as a fighter rather than a damsel-in-distress.

While Sally is kind, she is also very headstrong and often puts too much pressure on herself to think in the most logical way possible. She is sometimes insecure and often blames herself when a mission goes sideways or when she misinterpreted an earlier situation.

Sally is a firm leader who loves her people and her loved ones and has a strong sense of justice and a warm heart. She is caring, passionate, brave, determined and is always concerned for her friends safety, which also makes her look confrontation, overbearing, and hard.

Despite having average speed and strength, Sally is extremely athletic and agile, making her quick on her feet and has fast reflexes. She is also trained in lots of fields, including martial arts, swordsmanship, and survival.

Sally is a logical thinker to the point that her mind is wired to think in the most logical way possible, but this frame of mind is known to also being a disadvantage in some situations. Sally is also a skilled tactician.

Sally wears a pair of bracelets that emit energy-composed blades that can slice through metal and is strong enough to hold up against sword attacks.

Retrieved from "https://sonicfanon.fandom.com/wiki/Sally_Acorn/Marshalia13%27s_Universe?oldid=1860636"
Community content is available under CC-BY-SA unless otherwise noted.