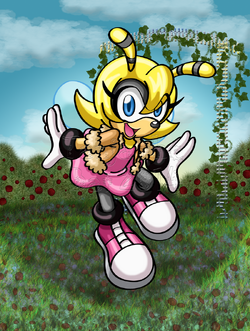 Saffron the Bee is a Freedom Fighter and protagionist of the Marshalia13 Universe. She is a young bee from the former Golden Hive Colony before it was taken over by the Wasps.

Saffron is much similar to Cream the Rabbit, timid than most of her friends and is accompanied by Angel, her Chao companion. Saffron is a bit girl and is often naive. Despite this, she's extremely brave and supportive. Though sometimes easily upset, she shows great loyalty and devotion and does not easily back down from a dangerous situation despite her inexperience.

Saffron was born in the Golden Hive Colony to a pair of the nobles. She was forced to flee the colony when it was attacked by the Wasps, lead by the Wasp Queen. She eventually took shelter in Mobotropolis, where she joined the Freedom Fighters.

Saffron's abilities are much similar to Charmy's, as a bee she can fly and use her stinger, but she also has assistance from her chao.

Retrieved from "https://sonicfanon.fandom.com/wiki/Saffron_the_Bee_(Marshalia13%27s_Universe)?oldid=1786053"
Community content is available under CC-BY-SA unless otherwise noted.