Unlike their predecessors, possess personalities; serving a bullies who enjoy tormenting innocents and fear Rutan's disapproval.

These variants are the most powerful of Rutan's SWATbot forces and most deadliest as one gave an entire freedom fighter group great difficulty. Despite their rather bulky size they are fast and maneuverable. They also possess stronger armor making them more durable against attacks that would normally destroy any robot.

The SWATbot Troopers are more humanoid than their bulky counterparts are are the most basic models as they were design to to defeat their enemies through sheer numbers.

An upgraded model of the original with improved weaponry and flight capability. It's three variable modes make the hoverbot a flexible high speed pursuit unit, but costs the unit durable armor making it easy to destroy.

Air support units for the ground force. They are fast and agile but have light armor in comparison to it's land based cousin. To compensate, they use swarm tactics to overwhelm their opponents.

Among one of the most deadliest of the Knight's robotic forces. They specialize in commando assignments, but make excellent front line units as well. They are a flexible unit that can be equipped for various armaments depending on the environment it is deployed in.

A gunship class unit, replacing the egg-shaped hover units. These units are armed to the teeth and are among one of the Knight's most powerful aerial units.

The more brutish version of the troopers and the true successor of the original SWATbots. They come in two versions; Version 1 being the heavy weapons type, while Version 2 being the standard type.

The symbol of the Knights of Chaos ground force. Carrying a vast amount of fire power and being heavily armored, the DYNAMAC MKII was arguably the most feared and effective land vehicle in the Knights of Chaos. They come his three variants; Assault, Artillery, and Mass Production.

As their name implies they are armed with flamethrowers along with common arm blasters. They are specifically designed to flush out enemy entrenchments and burning down obstacles.

This model is armed with an arm mounted heavy repeating blaster and packs a heavy punch against large groups. 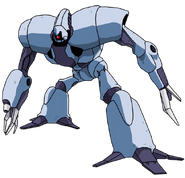 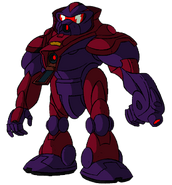