Rutan Prower (also known as Rutan the Echidna), is the only son of the late Lien-Da and Finitevus and the adopted child of Marsha and Tails Prower. While he loves his parents, he can't stand his mother's worries due to her past experiences. 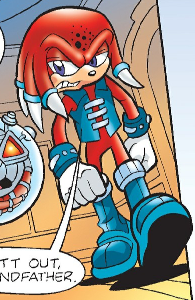 Rutan was born to Lien-Da and Dr. Finitivus prior to the Fall of the Eggman Empire. During the fall, Lien-Da was growing sick and dying when Team Vixi came upon her as the Dark Clan was crumbling. With no options, Lien-Da gave infant Rutan to the team before her death. Unsure of what to do, the team began to wonder who would even take in the baby. Eventually, Marsha decided to take the baby in as her own.

Rutan tends to be a troublemaker, and tends to dislike Marsha's strict parenting. He also doesn't get along well with his cousin, Lara.

Retrieved from "https://sonicfanon.fandom.com/wiki/Rutan_the_Echidna_(Marshalia13%27s_Universe)?oldid=1767412"
Community content is available under CC-BY-SA unless otherwise noted.