Rutan is a son of Dr. Finitevus and Lien-Da and twin brother of Jani-Da. The twins were born and train in Nocturne, when Lien-Da made Finitevus take full responsibility of their eggs. He serves as one of the main antagonist of the Sonic the Hedgehog (New Genesis) series and MXYL (New Genesis) Series. This Rutan is the reborn version of the MXYL Rutan. He is the leader of the Knights of Chaos and currently hold the 5th seat of the Legatus group along with his sister.

His fur was originally red and his eyes were brown with white sclera, although he is capable to change his fur color white and his eyes yellow with black sclera.

He typically wears a flowing, tattered black cape with an Enerjak helmet insignia on the back (in some appearance, on the front as well) with a heavy gold emerald clasp. Rutan also sports holders for his Warp Rings on the forearms and feet, essentially wearing them like heavy bangles or bracers. He also wears a belt with a round gold buckle. Beneath his cape is a grey vest with 13 slots on each side, and wears a pair of black boots with metal plating and a pair of fingerless black leather glove.

His armor form is like is white with a long black cape, black vest with 13 slots on each side, and his helmet resembles an Owl.

Rutan is a loyal member of the Noturnus Clan and part of the Royal Family and is ruthless to do anything for the clan's goal. He has a stern, dead-serious disposition, grim, expressionless and most of all ruthless. Despite this disposition, Rutan is capable to restrain himself at times when necessary.

Rutan's beliefs led him to go as far as destroying a village because of the possibility that an enemy could be hiding inside and searching inside will take alot of time. Another trait of his ruthlessness is when he made a slave to test a vehicle in case of sabotage, when the slave tried to shut down the out of control vehicle Rutan simply had the vehicle continue running until it explodes later stating all slaves will be doing the same.

Additionally, he has no tolerance for Nocturnus members who desert their posts, which the only consolation he does offer is that they should not dishonor their families by running away.

Similar to Sonic, Rutan possess a habit to insult his foes yet in a more darker tone, like telling Sally how much of a failure he is compared to herself and his ancestors, or mocking Shadow that his own existence was the reason those close to him died. He use his insult to provoke his enemies to attack him in rage allowing him to deal a crippling blow.

Despite all that Rutan respect accomplishments even from his enemies, like Tremor for being the first and only person to defeat the entire Nocturnus Clan.

In the MXYL Timeline the two were once lovers, though the relationship turned rocky after King Shadow's dethronement and Lien-Da's going into hiding. Despite suffering from the time alteration from King Shadow, both Rutan and Salma retain their past memories.

During Rutan's first invasion on Angel Island, both Salma and Rutan became aware of each others' existence, although Salma refuse to believe the two are the same.

When the two met once more with Salma voicing her doubts of who she thought was behind that armor, to which Rutanr coldly respond that he had destroyed his weaker past-self, spurring a duel between them. After destroying his helmet confirming his identity, Salma offered him a chance to return to the way things was Rutan cruelly cuts her throat showing every intent on killing her. Proven that the bond between them has died. The two resume their duel with Rutan being the victor, although Salma survived at the cost of her voice.

Whenever Rutan is near Salma suffers intense pain from her throat alerting the Chaotix that he is nearby.

As the leader of the Knights of Chaos and a powerful member of the Nocturnus Legatus, Rutan has complete authority over his crew. In addition, he was member of Royal Family in the Nocturnus Clan, which gave him dominion over an entire kingdom only below Ix, Finitevus and Zachary. As he holds the 5th seat of the Legatus, this makes him the 5th strongest of the group. Rutan also possess strong senses as he was able to fight off both the Freedom Fighters and Chaotix with his eyes closed.

Even as an infant Rutan's Chaos power was so great that he was a manifest his adult self thru his Chaos powers.

Rutan possess great reflexes and agility as he easily dodges Sonic's incredibly fast strikes to the point Sally believes the Super Sonic have a chance land a blow.

Rutan also possess unimaginable strength, as he fought Knuckles in a standstill albeit in a short time until he was overpowered.

Rutan is a skilled swordsman, although he mainly uses a combat knife, Hell Edge. He uses his Chaos Blade produced from his chaos energy for more serious fight. He can use both the Chaos Blade and Hell Edge as a two sword fighting style using the Chaos Blade for offensive strikes, while the Hell Edge for defensive and surprise attacks.

Rutan is also a capable marksman with great accuracy and precision, as shown when he shot and destroyed the data disk whilst it was still in Sonic's hands while running at a far distance with just his hand gun, Hell Blaster.

Rutan display great control with his Chaos Power able to control, create, and transform into chaos energy. He can fire beams of chaos energy from his fingers, hands, or feet.

Rutan's reflexes are so quick that he can transform into chaos energy to completely bypass almost any attack. He is able to avoid normal attacks by transforming into chaos energy, causing the attack to bypass straight through his body, which according Knuckles is a high level technique.

The most dangerous power is his ability to cut people connection to the Chaos Force, although the is unable to cut those with strong connection like Knuckles.

Hell Edge: It is Rutan's main close combat weapon. Rutan can insert an Enerjak-Memory giving it additional abilities depending on the memory.

Enerjak-Memories: It was later revealed Rutan has more and the 26 are his favorites.

Enerider: The Machine EneRider is Rutan's personal Honda CBR250R motorcycle. Rutan is very fond of the bike and states it's the fastest model made. The bike is also a control system for the Caterkiller train that Rutan got a hold of. It possess an A.I. called S.I.M., SUPPORT INTELLECTUAL MOTORBIKE. It can drive itself and comes when needed.

Rutan's Motorcycle
Add a photo to this gallery

Caterkiller Train: A giant train created by Eggman to plow through cities, but Sonic and Tails send it to the sea. Rutan manage to find it and did major changes with it and uses it as his ground base. Rutan made the armor permenanty indestructable, and increases its speed that it can warp to different zones. He also weaponized it with various types of weapons and equipped it with a shielded generator. It is also equipped it an A.I. called K.I.T., KILLER INTELLECTUAL TRAIN. It can drive itself and comes when needed. 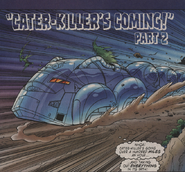 Caterkiller Train
Add a photo to this gallery

Retrieved from "https://sonicfanon.fandom.com/wiki/Rutan_(New_Genesis)?oldid=1771108"
Community content is available under CC-BY-SA unless otherwise noted.