Start a Wiki
This is an article about Rugal, a character created by Austin Bison on a date. It is currently owned by Skyblade743 as of 7/10/2017.

The author of Rugal Paramount considers this page to be unfinished. As such, some sections may change. 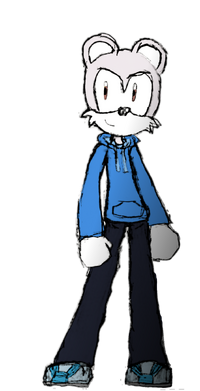 Rugal Paramount is a Mobian polar bear and a member of the Powers Club. Originally a fighter in the fight club known as Disaster Club, Rugal changed his way and started a slow road to redemption.

Rugal is probably best known for his ego. He is always seeking to be the centre of attention, being boisterous and regularly challenging opponents who are way out of his league. He rarely backs down from a fight, and even on the verge of death will keep fighting if he has to. He also has a snide sense of humour, making jokes at the expense of others and for his own amusment, and being quite the bully. This was to hide how insecure he was in his abilities and in himself, with the death of his parents and his failure to defeat Thundereye being a massive blow to his confidence. In truth, Rugal was incredibly shy when asked anything personal, and still is.

Since his decision to turn his life around and espeically after meeting the Powers Club, Rugal has mellowed out a bit. While a lot of his old traits still remain, his bullying attitude and snide humour have faded away. He's developed a strong bond with his friends and would be willing to put himself in harms way to protect them. That said, he wouldn't want to admit it and outwardly tries to put on the same facade (albeit much less convincingly).

Rugal was the youngest of two brothers born to a downtrodden couple living in the suburbs of Westopolis. Rugal and his brother both showed their powers from a young age for most, with most people desplaying powers in their early to mid teens. Rugal's parents regularly went to a fight club called Disaster Club, which involved battles between superpowered individuals, as one of the few means of enjoyment they could regularly afford. In order to make money to provide for the family, Rugal's parents entered him into the club's lowest tier, Level 3, when he was 12, having been training for two years beforehand. Rugal turned out to be a decent fighter, even at that young age, although he was far too inexperienced to compete with those in other levels.

However, when he was 13, Rugal's brother, who had taken the moniker Thundereye after losing his left eye in his very first match at the club, killed Rugal's parents. Rugal tried to fight him, but Thundereye was far more experienced and Rugal ended up on the streets, having only barely survived the encounter. During this time, Rugal regularly attacked those weaker than him, including a young hamster named Carl. Rugal started to enjoy the constant battle of living on the streets, and was slowly become more sadistic.

However, a year later, Rugal heard about Sonic the Hedgehog after the latter defeated Perfect Chaos in Station Square. Although he didn't care about the hedgehog at first, over the next year Rugal came to think that Sonic was a kindered spirit and he came to realise that he was slowly becoming more like his psychopathic brother. At this point, he turned himself into an orphanage and started trying to improve on the education he never really got after relentless training to fight in Disaster Club. After a massive spike of people with Power Genes, Rugal caught wind of a small club of those with powers in the part of Westopolis known as the Crater. Thinking it woould help him with his past, Rugal joined.

Rugal's main power is that he can drain heat from his surroundings and use it to enhance his arracks. He can focus the absorbed heat into his hands and feet to increase the strength of his attacks and burn his enemies. His heat draining powers can also be used on people, giving them frostbite or outright freezing them if he absorbs enough heat. While his pyrokinetic abilities are mostly limited to enhancing his attacks, he can control the flames to a degree to unleash short range bursts of fire. He has boasted that he can throw fireballs as well, though no one has seen him do it, so this is likely his ego talking.

In order to maximise his power, Rugal has taken to extensive boxing training and has exceptionally strong punches. Additionally, Rugal's time in Disaster Club allowed him to fight a vairety of opponents, giving him knowledge of how to fight against a variety if combat styles.

Rugal finds it hard to fight in cold environments where there's less heat to absorb, meaning his attacks are likely to be weaker there. Also, although he is a strong boxer, he lacks any other means of hand-to-hand combat (seeing kicking would burn through his shoes), which may give more well-rounded fighters fighters more of an edge in combat.

Rugal's biggest weakness, however, is his ego. He can rush into things without thinking, just to show off his powers. This means he can easily be defeated by opponents whi can outthink his rudimentary tactics.

While they initially butted heads due to Rugal's dark past, Natalie and Rugal have since reached an understanding, and Natalie is helping him to become a better person.

Rugal's initial encounter with Carl involved beating him up. Since then, Rugal has been rehabilitated, and although they initially had a very rough start within the Powers Club, Rugal has since apologised for his actions and they've become good friends.

Retrieved from "https://sonicfanon.fandom.com/wiki/Rugal_Paramount?oldid=1871420"
Community content is available under CC-BY-SA unless otherwise noted.