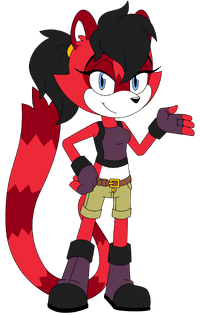 Ruby the Lemur is a member of the Viridian Jungle Freedom Fighters. She is also the sister of Onyx the Lemur.

A slender lemur who stands a little over three feet tall, Ruby has a short muzzle with a triangular nose, somewhat small, oblong ears that stand upright, and a long, fairly slim, semi-prehensile tail.

Her fur is primarily imperial red in color, with Heidelberg red ears, facial markings, and tail rings, and a white muzzle, chest, and stomach. Her hair, which is somewhat long and tied back in a high ponytail, is black in color, and her eyes are jordy blue in color.

Being a lemur, Ruby is highly agile, and is a skilled climber, scaling trees and even walls with ease. Being so agile, she is quite good at parkour as well, and can use this to easily get around her opponents, or even get the drop on them from above. She is fairly good at fighting, and specializes in swift, hit-and-run tactics, quickly striking at her foes before using her agility to try and evade counterattacks. Her speed lets her put a good amount of force behind her attacks, as well.

Her long tail is semi-prehensile, and she can carry lightweight objects with it; her tail also helps her to balance while she is climbing and parkouring.

This Genetic Ability manifests in the form of an unusual muscle structure that does not lock up when hit by an Electric-aligned attack; while she will still take damage from the attack, this makes her practically immune to the common secondary effect of paralysis. However, it does not protect her from any paralysis induced by severed nerves or a severed spinal cord.

Ruby has no specific resistances to any Elements or energy-types. She is quite fast, and can easily outpace slower foes and evade their attacks.

Ruby has no specific weaknesses to any Elements or energy-types. Her defenses aren't anything special, therefore she mostly relies on her agility to try and evade potentially devastating attacks.