Start a Wiki
This is an article about Rouge the Bat (animated), a character created by Majin Ghidorah on 12/4/2015. 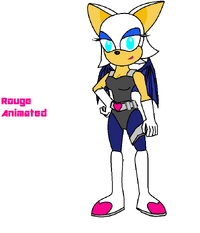 Rouge the Bat is the agent in Sonic Team in Sonic Animated tv series. She is voiced by Karen Strassman.

Rouge is an tall, tan-skinned bat with white hair and sky blue eyes. She has an grey bodysuit with blue leggings and without sleeves and has an utility belt with an heart  on. Her white boots has hearts as well and her gloves are white as well. Her wings on her back are bluish purple.

Like her mainstream counterpart, Rouge has a like of jewels and is very seductive towards males, especially Knuckles the Echidna who gets ticked off by her. But mostly Rouge has an caring personality. She is also known to play video games with Tails and go shopping with her friends.

This version of Rouge was born in Miami in Florida after her parents arrived there from Mobius. She grew up among humans and is respected by the community. In the spare time she was trained by her father and mother to become an excellent fighter. After finishing school, Rouge was hired as an agent at G.U.N.

Rouge has no special powers.

Rouge possesses the ability to fly with the help of her wings on her back. While on ground she can run like a regular human being and is very sneaky and stealthy.

She has been trained in many martial arts like ninjutsu and judo and can take down a whole group of thugs or robots without breaking a sweat from fighting them. She is also known to distract her opponent by placing a kiss on the cheek and knock them out. She also can do a move called screw kick.

Having no special power Rouge can be defeated by other skilled fighters.

Retrieved from "https://sonicfanon.fandom.com/wiki/Rouge_the_Bat_(animated)?oldid=1853050"
Community content is available under CC-BY-SA unless otherwise noted.