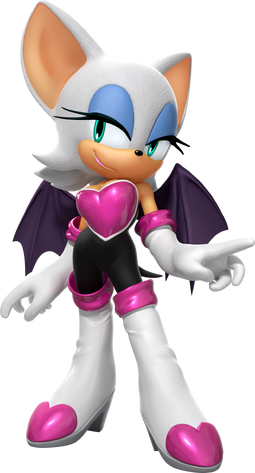 Rouge the Bat is a recurring character in the Marshalia13 Universe. She is an anthropomorphic bat and jewel thief working as a part-time government spy for the President of the United Federation, and an agent on loan for the Guardian Units of Nations. A world-famous freelance treasure hunter, Rouge has a weakness for jewels, like the Master Emerald and Chaos Emeralds, which she always obsesses about. As a spy, Rouge is trained in combat, stealth and infiltration, and possesses both super-level kicking power and flight.

Rouge is a white bat with teal eyes. Her muzzle and torso are somewhat tan, though often colored as light as Sonic's peach arms and front. Her dark wings are often colored black or purple. Her short white hair flares out at the back and she typically wears blue eyeshadow, as well as lipstick on occasion. Her typical attire consists of dark skintight pants, a pink, heart-shaped chestplate-like top with white trim, and tall white gloves and boots with pink cuffs. The boots are high heeled and feature hearts on the toes.

Not much is known of Rouge's origins or past, though at some point she gained an obsession with jewels and became a treasure hunter. She also joined the Guardian Units of Nations as an undercover agent, and was paid for her services with gems and other riches. She gained possession of the blue Chaos Emerald at some point.

Rouge first became involved with Dr. Eggman's campaign to conquer the world when the two of them separately invaded Angel Island in an attempt to seize the Master Emerald. Knuckles the Echidna chose to shatter the Emerald and scatter its fragments across the planet rather than let either thief seize it, prompting Rouge to set out in search of the broken pieces. In the course of her quest she entered into an alliance with Eggman, and thus became acquainted with Shadow the Hedgehog. After operating with these new allies for some time, Rouge engaged Knuckles in a final confrontation, after which she decided to cede the Master Emerald fragments she had collected to him. She and her allies then teamed up with Knuckles, Sonic the Hedgehog, and Miles "Tails" Prower in order to save the planet from the threat of Space Colony ARK's plummet, which resulted in Shadow's apparent death.

After infiltrating one of Eggman's bases in search of treasure, Rouge discovered Shadow in a stasis capsule, and inadvertently awakened E-123 Omega by releasing him. The amnesiac Shadow and the rebellious robot were persuaded to join forces by Rouge, the trio becoming Team Dark. Working alongside-and at times against-Team Sonic, Team Chaotix, and Team Rose, they eventually participated in a final battle against Metal Overlord, the mutated form of Metal Sonic.

During the Black Arms Invasion of the planet, Rouge operated as an agent of G.U.N., fighting against the alien invaders. She and several other natives of the planet eventually boarded the Black Comet, where they were rendered helpless by a paralyzing neurotoxin. Fortunately Shadow, who had been somewhat divided over his connections to the Black Arms, rebelled and fought against Black Doom, eventually transforming into Super Shadow in order to fight against Devil Doom.

During a time travel adventure-the events of which were later erased-she and her teammates worked together against Mephiles, a monstrous being who took Shadow's form. When it became known that a possible future would see Shadow betrayed and captured by a reprogrammed Omega, Rouge vowed that she would always stand with their Hedgehog friend.

Yet another adventure saw her involved with the Wisps, an alien race that Eggman sought to prey upon.

she was among the friends and allies of Sonic scattered across time by the machinations of two versions of Eggman and the power of the Time Eater.

Rouge is a strong-minded young woman, a fearless, ambitious, independent, flirtatious, greedy, ruthless, calculating narcissist who most people see as only caring for herself and her gems. Despite this, she can be helpful and affectionate in her own way, usually towards a select few. She is not above using seduction and manipulation to get what she wants, and is willing to be dishonest and even treacherous should the situation require it with little if any qualms. She is fully aware of her image and will often appear to be sweet when at her most cruel.

For all her sass and underhandedness, though, Rouge does possess a caring side beyond her thieving, double-dealing ways having occasionally shown that she can be heroic and a touch ethical, even if it meant sacrificing something she really wanted to get her hands on. She is often capable of recognizing true evil when she sees it. Regardless, her care is usually reserved for those close to her.

Being a bat, Rouge is able to fly and glide. She is a skilled fighter who specializes in kicks. Working as both a spy and a thief, she is also been shown to have a knack for espionage, manipulation, sneaking and computer hacking. She's also shown being competent in operating a variety of vehicles such as space shuttles.

Since their first encounter, Rouge has kept up a love/hate relationship with Knuckles the Echidna, revolving around their rivalry as treasure hunters and over possession of the Master Emerald. While she has primarily expressed interest in the jewel, she does possess some real feelings for Knuckles, questioning whether a life of duty and isolation is truly what he wants and respecting his claims on the Master Emerald. Despite this, she also enjoyed teasing him, jokingly threatening to steal the Emerald.

Rouge has demonstrated a strong connection with Shadow the Hedgehog, transcending their status as teammates; she is deeply concerned for his welfare. During the erased events of the timeline where they engaged Mephiles, she swore to always stand by him. This does not mean that she does not at times find him infuriating, though she is not above making jabs at him. Despite this, she does care deeply about him, and seeks to help him in whatever circumstances.

Rouge's second best friend is Omega, who is very loyal to her. The two are close allies, and she shows signs of caring for him. She has sometimes shown annoyance at Omega, saying that he is too serious and that she is tired of hearing him ramble on about revenge and hatred.

Rouge and Amy are generally portrayed as arch-rivals towards each other. Their relationship is similar to Rouge's relationship with Knuckles.

As seen so far, Rouge and Sonic don't really show a dislike for each other, despite him being Shadow's rival and she being Tails, Knuckles, and Amy's rival. Also, despite having some conflicting encounters and standpoints, they appear to be on good terms. Rouge often flirts with Sonic and gave him the nickname, "Big Blue".

Tails and Rouge have a friendly relationship but Rouge sometimes adds complications to it. They will usually get along but Rouge will sometimes playfully tease Tails to just get a reaction from him. Despite this, she is aware of his relationship with Marsha.

Retrieved from "https://sonicfanon.fandom.com/wiki/Rouge_the_Bat_(Marshalia13%27s_Universe)?oldid=1786596"
Community content is available under CC-BY-SA unless otherwise noted.