Ruby Melter, known by most as Rouge the Bat, is the younger child of the late Herman and Esmeralda Metler, the younger sister of the now-robotic Shine the Bat, the niece of Holly and James Carver, and the older cousin of Angel the Bat. 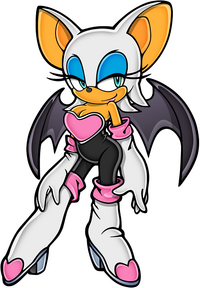 Getting what she wants

Winning a fight against Dr. Eggman

Knuckles (Crush)
Dislikes
Anyone taking her gems from her

Losing a fight against Dr. Eggman

Not getting the Chaos Emeralds or the Master Emerald

Having to give up gems

Admitting that she is wrong

Ruby Melter was born the second and last child of Herman and Esmeralda Melter, and the younger sister of Shine Melter. When her parents weren't treasure hunting, her younger cousin, Angel, was often dropped off at her parents' house, often because her uncle and aunt were too busy with work most of the time. Because of this, the two of them developed a close relationship with her.

When Ruby was twelve, a young cat named Zona, who also happened to be one of her parents' rivals, captured her, along with her brother, Shine, and held them hostage in a large tomb where her parents had planned to steal a valuable treasure. Zona had told them if they wanted their children back, not only would they give her the treasure, but to give her any remaining treasure they currently had. Herman and Esmeralda agreed to give her the treasures, since their children were more important to them.

Once they arrived at the tomb, Zona would agree to free them, but only if they brought the treasure to her. They did, and once Zona cut the ropes, one of them accidently hit a tile that set off a trap, setting the tomb on fire. Shine and Ruby escaped, but Herman, Esmeralda, and Zona died from either smoke inhalation or injuries caused by fire, due to being unable to escape.

Shine was able to get to a nearby hospital, but died later that night from smoke inhalation, just like his parents, making Ruby the only one to survive the incident. Ruby ran away that night, and decided to change everything about herself, even going as far to change her name to Rouge, in an attempt to put everything behind her.

Rouge first appears in the first part of Chapter 1 of Sonic Fanfiction, as one of the judges of the Chili-dog eating competition, along with Amy and Dylan. Since she was one of the judges, it is possible that she was the one who either showed concern when Blaze was barely chewing the chili-dogs, or the one that commented on the competition shown between Blaze and Sonic ("contestant number nine and contestant number ten"). When the contest ends, Rouge agrees with both Dylan and Amy that Blaze had won, judging that she had no chili-dogs left on her plate, and adding that she was somewhat surprised.

In the second part of Chapter 1, it is revealed she was the who had sent the note telling Charmy to skip school, and meet her at Future City Park. Charmy tells her that Jerome had warned him about her, and that he shouldn't be talking to criminals. Rouge attempts to flatter him by calling him smart for thinking that way, and telling him he was right for having that sort of thinking.

Charmy asked her what she wanted and why she called him here, and she tells him she figured boys don't like gossip, but apparently there was a rumor going around that they were harboring a Chaos Emerald. He nervously asks her what made her think that, and she casually tells him it was just a rumor, though it seemed her eyes were "scanning" him, "as if they were looking for any sign of weakness". He tells her she may have paid him ten rings for nothing, because they didn't have a Chaos Emerald. However, after some gradual exchanges in ten-ring-bills, he tells her where it is (in the right part of a room, but in a false location), she pays him an extra fifty to retrieve it for her in three days, or she will find a way to get the Emerald, and the money back herself. After he agrees to the job, she flies off.

The third part of Chapter 1 is taken from Rouge's POV, and similarly two the last two, it is written in second-person narration. Rouge is seen flying off from Future City Park,  feeling satisfied with herself. She thinks to herself how she knew she needed someone stupid enough to "mess things up" for his team, but not stupid enough to be unable to complete the task, moral enough to help his teammates, but not moral enough to worry about whether or not he should steal the Chaos Emerald. She decides to wait a few days, and the Chaos Emerald would be hers. She perches on top of an unidentified building and ponders this.

Rouge remarks that she is thirsty, feeling a bit bored, and that she could "go for a little class". Rouge remembers eavesdropping on another conversation a few days before, about a new jazz club. At first, she thinks it might be a bit incovnient to go in the middle of the afternoon, but after some thought, thinks it might be one of the best times, since there probably wouldn't be a lot of people there. Rouge decides to have a drink to celebrate her little victory, and then to go home. She notices some white-ish-silver and red neon beneath her feet, and flies to the ground to take a closer look.

The building is known as the Glimmor Jazz Club. Rouge decides that this was the place she must've heard them talking about. She thinks the name is a bit tacky, but decides to go in anyway.

Rouge walks in, and notes the decor around her, which she thinks is a bit distasteful, though the cool jazz music that was playing was not bad. She sees three young women over at one of the tables, and one of them makes a comment about her, but she can't hear what she said. She then looks over at the bar, and sees a nicely dressed, cream-colored crocodile having a casual conversation with the bar tender, who appears to be a white weasel/rabbit hybrid. She decides to sit by him.

The two greet each other casually, (even though they have never met) the crocodile having a slight flirtatious tone in his voice. Rouge notes that he is odd-eyed, and finds it interesting. The bartender asks what he can get for her, and Rouge requests a shot of straight chardonnay. The crocodile pays for the drink, telling Rouge that a pretty lady like her should not have to pay for her own drink. Rouge is flattered by this, even though this is not the first time a man paid for her drink.

A moment later, the bartender slides the drink to Rouge, who catches it skillfully before it falls off the counter. She thanks him and finishes the shot, feeling it cool her veins and making her slightly dizzy. The crocodile asks her if they have met before, since she looked familiar. Rouge introduces herself as the world's greatest treasure hunter, and the crocodile seems to have heard of her, adding that sometimes he liked to do a little adventuring when he has the time, but he is busy a lot of the time. Rouge asks the crocodile his name, and he almost says one name, but then looks distant for a moment, and tells her even though he did not have much, it doesn't take a lot of alcohol to make him forgetful, telling her his name is Clint. Rouge gets the feeling that it isn't his real name, but decides it doesn't matter.

Clint asks Rouge about her findings, and Rouge thinks for a moment, and then tells him she found a red emerald in an old castle (referring to the red Chaos Emerald). She notices her chardonnay had been refilled, and that Clint had paid for it. She thanks him and takes another sip, but she notes to herself she does not want to drink much, since last time she had too much, she had done things not worth mentioning, and woke up in prison.

When Clint asks her if she had located any other like it, she tells him she located it, but did not retrieve it. Instead, had paid a little kid (referring to Charmy) to retrieve it for her, because he and his friends needed the money. Clint compliments her and tells her that it must be nice to have someone else do the dirty work for her.

Rouge asks Clint about his job, and all he tells her is that he works for a people "in business", but that his job  is complicated, and difficult to explain exactly what he does. Clint's cellphone rings, and he excuses himself, and moves to the nearest corner of the room. Rouge takes out a listening device from hammerspace, and puts it on her ear. While listening, she assumes Clint and whoever was on the other line were talking about the location of the Chaos Emeralds that she was talking about a moment earlier. When Clint gets off the phone, and Rouge takes off the listening device, he tells Rouge he has to leave, though it was nice speaking with her. Rouge pretends to be slightly dissapointed, though she gives a mischevious smile she knows he would not understand the meaning behind. They shake hands, and she waits for thirty seconds to leave after Clint is gone.

Rouge has a hard time seeing once she outside, because she had gotten used to the dim lighting of the jazz club, forgetting how bright it was. She pulls a pair of sunglasses out of hammerspace, and smiles, her eyes feeling more comfortable. Checking her cellphone for the time, she finds she was not there for very long at all. She walks down the sidewalk and comes up to a dark, shadowy alleyway, where she sees Clint speaking with a large, shadowy figure. Putting the listening device back in her ear, she realizes the conversation she had with Clint had been recorded. After watching Clint and the figure slip off into the shadows, she wonders what that was all about.

She decides to go home and figure it out later. Rouge flies off, hoping the Chaos Emerald she had collected earlier was still safe.

Like all bats, Rouge is capable of flight. She also has excellent hearing, like the other members of her species.

Rouge has Super strength, rivaling that of Knuckles the Echidna, but it seems her strength lies in her lower body, rather than her upper body.

While Rouge cannot reach Sonic or Shadow's running speeds while running or flying, she is capable of reaching high speeds either way.

Possibly because of her parents, Rouge is a skilled treasure thief, and has pulled of several heists without getting caught by the authorities.

Rouge also has a incredible amount of stealth, being able to undetected, usually on missions and heists.

Retrieved from "https://sonicfanon.fandom.com/wiki/Rouge_the_Bat_(IncaIceBunny%27s_universe)?oldid=1838135"
Community content is available under CC-BY-SA unless otherwise noted.