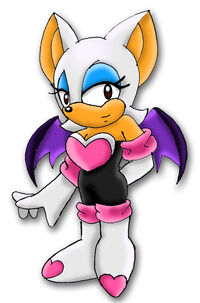 Rouge the Bat is a treasure hunter that helped the kids gather the Chaos Emeralds and stop the Eclipse Cannon.

When Rouge has a goal, she'll stick to it until she completes it. She believes in friendship and teamwork, and she's very honest. She's motivated by the spirit of adventure and thinks one should "fly in the freedom."

Rouge made her debut during a time where Mobius was conquered by Shadow the Hedgehog. She offered the kids her assistance in recovering the seven Chaos Emeralds before Shadow could use them to fire the Eclipse Cannon and destroy the world. They were ultimately successful.

She later reappears when Shadow and Metal Sonic teamed up and helped out Sonic and friends once again.

Rouge has limited Chaos Control and Chaos Light powers. She claims she's "just normal" and that she likes being that way.

She has the ability to fly and glide gracefully in the air. She can also jump higher than most of her friends. Being a bat, she can also hear supersonic frequencies and see well in the dark.

Rouge possesses great tracking skills, which she uses to her advantage treasure hunting and when she helped out the children during the Eclipse Crisis.

Rouge's bat instincts make it hard for her to use her vision at night, even though she has impressive night vision. This results in her stumbling and flying into things.

Retrieved from "https://sonicfanon.fandom.com/wiki/Rouge_the_Bat/Mobius_Redrawn?oldid=1854464"
Community content is available under CC-BY-SA unless otherwise noted.