Darkest Shadow, the author of Rouge the Bat/Darkest Shadow's Universe, considers this page to be unfinished. As such, some sections may change. 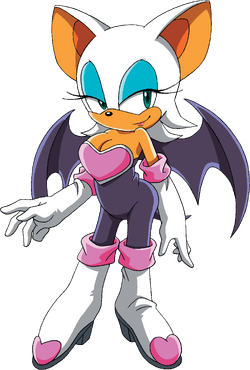 Rouge the Bat is a character created by SEGA. She is a jewel lover, and theif, who sometimes steals jewels. She is the also an spy and agent for GUN. She is the girlfriend of Knuckles the Echinda

To describe Rouge in one word, it would be flirty. Rouge charms a lot of guys, and flirts with the ones that she finds cute. Her flirts make people feel somewhat good about themselves and the men who Rouge flirted with have a spot in their heart with her all over it. She can seduce people with her attractiveness as well, even to the point where she kisses them.

Rouge is also very strong minded and independent. Despite her flirts through her city travels, her work for the GUN agency is a whole different story. Rouge prefers to work alone, and has a mind of her own; even if she has to add a little "pizzazz" to the president's plan for his agents.

Rouge also happens to be a little greedy and selfish sometimes. Her greed sometimes involves her taking any gem she could find, and keeping it for as long as she can live, and claiming things that don't belong to her as her's. She also doesn't let others touch "her" gems.

Rouge stands at 3'7" tall, and keeps her weight a secret. She has white fur and a tan skin tone. A very notable feature is that Rouge has absolutely no fur from the neck down. Her wings are pretty average in size for a bat. Her spines are pointed downwards, and faced out to look like short and spazzy hair. Her ears have a little bit of orange in them along with her natural tan color. Her eyes are separated, and she also has jade blue eyes.

Rouge's attire is somewhat complex; if not the most complex design out of all the Sonic-half of the Sonic and Mariala Anime. Rouge wears a contoured black-grey jumpsuit, that covers her body from her chest down to her feet. She also wears a pink heart-shaped chest plate with silver lining. She also wears long gloves that go up to her elbows with pink cuffs on them. For footwear, she wears knee-high high-heel white boots with pick cuffs on the top, and a heart motif on the tips similar to the plate on her chest with metal soles and heels. For an extra facial appearance, she wears light blue eye shadow, pink lipstick and mascara.

Flight- Because of her bat-wings, Rouge is able to use them to fly. She flaps them to propel herself high and far into the air. This often comes in handy when she needs to help others escape from a place fast, or to defend herself in battle. Often times, Rouge will be flying instead of running at certain points.

Superspeed-Like most of the others, Rouge can run at high speeds that near superhuman. She is fast enough to catch up with Shadow, and can outrun Knuckles. However, her speed doesn't compare to Sonic or Shadow's speed at full potential.

Super Strength- Rouge happens to have immense amounts of power during fighting. This her super strength is usually seen from her legs, as she can knock over something as big as a small house with just one foot. She can also break through hard structures, such as metal, or hard cement.

Enhanced Hearing- Due to her big ears, she happens to have excellent hearing, and can hear things from a mile away. She can use her hearing in a good way by listening to secrets that criminals hide, and report that back to the president for him to call in the forces and agents. This also comes in handy when she is trapped in a confined space, and she can tell when someone is there to rescue her.

Retrieved from "https://sonicfanon.fandom.com/wiki/Rouge_the_Bat/Darkest_Shadow%27s_Universe?oldid=1800030"
Community content is available under CC-BY-SA unless otherwise noted.