Start a Wiki
This is an article about Rouge the Bat/Black Flame Continuity, a character created by TheDarkMantis15 and CrimsonFlame2K on 12/22/2017. 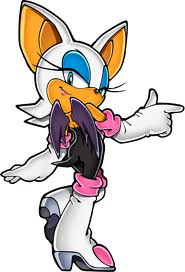 I'd still be at Flaminge, having my beauty nap, if a certain fox hadn't called me over! ...but hey, this is some deep shit we're looking at, so I guess I can let that slide.

— Rouge upon being asked why she came back to the group, The Cybermal Onslaught

She definitely knows how to kick some ass, both figuratively and literally! Rouge the Bat is one of GUN’s most valuable stealth experts and spies, as well as a skilled treasure hunter. She is a major character in the Darkness Trigger series, making her series debut in the second installment of the series, The Cybermal Onslaught, in GUN’s efforts to repel a new foe who claims to have been a victim of their actions…

Rouge stands at five feet, two inches and sports white fur around much of her head, which sports a pair of large ears on top of it and a few tufts of fur at the lower back of her head. Meanwhile, much of her voluptuous body, along with her muzzle and inner ears, seems to consist of nothing else other than a tan-colored skin tone. Her eyes bear a teal-colored shade and she wears pink eyeshadow on her eyelids. A large pair of black wings can be seen on her back, providing her the capability of flight.

Her outfit consists of a dark purple skin-tight top with a pink heart-shaped pattern with silver-white edges that exposes much of her chest and back, the latter of which allows for sufficient room for her wings. Wrapped around her lower body is a pair of white, equally skin-tight leggings, as well as a pink belt with a white heart-shaped buckle around her waist. A pair of white, arm-length gloves with pink accents can be seen around her arms and a separate pair of dark purple boots with metallic heels and a pink, heart-shaped emblem on the toe area of each boot is adorned around her legs. She also sports a pink-and-white eyepiece with a greenish-blue lens on the side of her head.

Rouge is best defined as a highly-professional, capable, and somewhat ruthless agent working for GUN, with rather blatant hints of an incredibly flirtatious, seductive, and playful side to her, which can cause people to think of her as something of a ditz. Of course, it should never be forgotten that Rouge is also known for her love for jewelry and other fancy gems that might as well border on pure obsession.

She is also a very disciplined and highly-skilled combatant, often taking the art of fighting rather seriously, something that she takes a lot of pride in. That said, she has been known to opt for a more pragmatic and dirtier approach to fighting rather often, though this is only because she frequently ends up fighting opponents that outmatch her in some aspect. Rouge is also capable of being laidback and simply having fun during her free time, if the fact that she owns her own nightclub over at the Night Babylon district in New Haven City is any indication.

Previously, Rouge was rather selfish and cared only about her personal interests, but this trait has gradually diminished over the years. In present day, she cares a great deal for her allies, her colleagues in GUN, and especially the rest of Team Dark. However, she sometimes does fall back into the habit of becoming distracted by a particularly shiny gem and potentially risk jeopardizing whatever mission she is on should it occur then. In addition, she still likes to tease and flirt with others, though she does this only to get a quick laugh whenever she gets bored.

All in all, however, Rouge has become a more heroic individual and someone who will ultimately set aside her selfishness for the sake of the greater good, as well as the friends she’s come to love and genuinely care for overtime.

Rouge possesses rather impressive lower-body strength - specifically, around her legs and feet - comparable to that of Knuckles’ upper body strength. This immense strength allows her to beat the ever-living tar out of her opponents with either a lightning-fast flurry of kicks or a single, powerful kick that can shatter the opponent’s bones with enough effort. She has been implied to be capable of creating small earthquakes simply by kicking the ground with enough force to cause such an event. Two notable techniques of hers are the Drill Drive, where she rushes towards the opponent feet-first with a high-speed, drill-like attack, and the Lethal Screw, a rising spinning kick attack.

She is also quite acrobatic and agile, being capable of evading blows with relative ease, among other maneuvers in her skillset that require being nimble. Of course, this impressive agility of hers is also present while in midair, being able to dodge attacks coming at her while soaring through the skies with ease.

Rouge has been frequently touted as one of the world’s leading experts in the art of stealth and espionage, with her field of experience in such an area rivaling those of even Espio, a highly-skilled practitioner of ninjutsu and another stealth expert himself. Along with this comes a knack for tracking down valuable treasures, with her main specialty and preference being jewels and other priceless gems.

Another minor ability that Rouge sports is an above-average sense of hearing, largely thanks to her large ears. With this, she can hear even the most subtle of movements without trying too hard. This means that sneaking past her presence is often a difficult ordeal to overcome.

Attack: 7 - Rouge’s legs are incredibly powerful, rivaling that of Knuckles’ fists. This makes her an impressive capable of beating much of the competition with her legs.

Defense: 5 - Her focus on maintaining her momentum in a fight does not leave much for her on the defensive side.

Speed: 7 - Given her powerful legs, Rouge is able to move around and strike her foes just as quickly.

Magic: 0 - Rouge lacks any sort of supernatural powers of any sort.

Evasion: 7 - Coupled with her ability to fly, Rouge's natural nimbleness and agility enables her to make split-second reactions and move around the field with finesse.

Intelligence: 7 - Being a skilled spy and stealth expert requires a good deal of intellect, and Rouge definitely knows how to think her way through several situations.

Skills: 8 - Having trained in her fields of expertise throughout the years has made Rouge quite adept as both a stealth operative and a martial artist.

Accuracy: 8 - Rouge surely knows where to strike her foes to deliver the hurt, and she shows quite an impressive aim when tossing any of her Bat Crackers.

Stamina: 7 - Years of training has made Rouge's body able to keep up a good fight for as long as she needs to.

Tolerance: 5 - Despite all of that, Rouge still feels as much agony as any other Mobian.

Like Amy, Rouge is primarily a close-ranged combatant in the battefield. However, she does sport some tools that allow her to fight from a distance, and her Trigger move has its uses in confusing the opponent should it take effect. She can then take advantage of the confusion to unleash a powerful barrage of kicks before finishing it with a powerful Critical Trigger for big damage. However, Rouge's focus on maintaining the offensive leaves her relatively frail and can be taken down fairly easily should she become reckless.

One immediate weakness present in her biology is that her large ears leave her vulnerable to particularly loud noises, as her enhanced sense of hearing means she can hear it more clearly. Being a melee-oriented fighter also leaves her options for zoning somewhat limited, with the sole exception of her Bat Cracker.

Rouge is also rather stubborn whenever she does get into a fight. This has put her in some rather dangerous situations at times, often requiring some assistance from others to bail her out. In addition, her skills in stealth are far from flawless, as impressive as they area. This is mostly caused by a case of poor judgment on her part, however, and she has been trying to overcome this issue over the years.

"Aw, how come Shadow gets a warm greeting from you and I don't, Big Blue? How mean!"
—Rouge jokingly calling out on Sonic greeting only Shadow

"It's the least we could do for [Team Thunder's] assistance. Hell, they already had the right to know the moment they offered."
—Rouge agreeing on the notion that Team Thunder should know the truth regarding the Destroyer

Retrieved from "https://sonicfanon.fandom.com/wiki/Rouge_the_Bat/Black_Flame_Continuity?oldid=1786190"
Community content is available under CC-BY-SA unless otherwise noted.