Start a Wiki
This is an article about Rose Hellsing, a character created by MaverickHunterSigma on 09/27/2013. 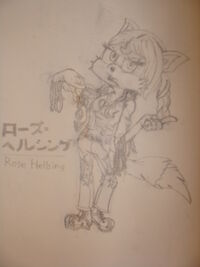 "What a giant pain in my ass."
—Rose Hellsing

Rose Hellsing is the younger sister of Argent Hellsing and is the user of a powerful Stand named "The Reaper".

She is the current fursona of OmegaExalted, along with Argent.

Rose is an Albino wolf, likewise having the trademark white fur and red eyes. Her hair is shoulder-length and is dyed blonde, fashioned into a side ponytail on her left side. Though she has a relatively strong build, her muscular figure isn't obvious.

Rose wears a white vest with a gold star design where her breasts are and a sort of "wallet chain" hanging from the right side of the collar. The chain hangs under her arm and re-enters the collar halfway across the back. In the front, the chain is adorned with three large charms: From the top down, the charms consist of a gold star with a rose design carved into it; a gold timepiece in the middle; and lastly, an arrow-shaped pendant designed not unlike the Stand Arrows, at the very bottom. Underneath she wears a pink lacey shirt with a small heart-shaped "cleavage hole" and frayed sleeves below her elbows. For pants, she wears your basic blue jeans with a pink star pattern stitched into the thighs. Lastly she wears a pair of black socks and brown steel-toed boots. She doesn't wear gloves.

She frequently wears pink lipstick and gold nail polish on her claws in both her fingers and toes.

Rose often appears to be bored, and is rather indifferent when introduced to new faces. She is often quick to judge others upon first meeting them, believing that the first impression provides a lot of information about a person's nature. That being said, if she sees you as a criminal the first time she meets you, don't be surprised if she proceeds to pummel the living crap out of you. If you do survive this encounter without being hospitalized for months, it will take a bit to change her opinion of you. However, she is not without empathy, and she is not limited to talking with her fists.

Eventually I'll get to this.

Rose is not only strong, but strong-willed; she is a determined fistfighter with a good amount of endurance to match. She's also a profoundly intelligent girl, and is great with tools. In short, she's capable of being both the brains and the brawn.

Solar Cross: She'd built one of these for both Argent and herself; however, she's only limited to the Solar Cross' primary function.

HF-49 Snowstorm: Rose had "persuaded" an OmegaCorp merchant to sell her one of these, keeping it handy for when she needs it.

Rose possesses a Stand named The Reaper (ザ・リーパー Za Rīpā). She is a female humanoid Close-Range Stand whos appearance is, likewise, based on the Grim Reaper. Physically, however, she also shares some resemblence to her owner; she has a similarly sized body and closely resembles a Mobian, even sharing some of Rose's facial features. Though she wears a cloak over her head, the hood section seems to imply that she also has animal-like ears. The cloak she wears is long and black, and is draped over her right shoulder; it is secured at the shoulder by three skull-design emblems. Her right breast is covered by cloth wrappings, while her left is covered by a gold armor of sorts. She appears to be wearing some form of chain armor on her arms that appears to be broken apart below the elbow. Lastly she wears a white skirt along the left side of her legs, complimenting the black cloak hanging down her right side, and wears open-toed leggings with star designs etched into the armor. She possesses a wolf-like tail, as well.

(Personally I'm not sure about this one, I'll probably change it when I think of better ideas.)

The Stand has no visible personality and is mostly silent, with the exception being her battle cry of "Ora, ora, ora!" when attacking.

Rose had gained The Reaper through her amulet, passed down from her biological mother before she was taken. Unknown to her, the amulet was made from the same meteorite used to create the Stand Arrows. However, this alone wasn't enough to develop a Stand; she had to draw from her stress and her desire for revenge over several years before the Stand manifested itself.

Rose is capable of using her Stand to traverse large distances.

One possible weakness is that any damage sustained by one's Stand is transmitted to its user. For example, if the Stand's leg were to be ripped off, the user's leg is severed as well. This is a general rule for all Stand users, not just Rose.

Ironically, Rose is also afraid of the dark. She's fine with travelling around the city at night, but she refuses to venture too far into unlit areas; she is afraid that any impairment to her vision could be fatal. If she has any desire to venture outside of the city during the night, she waits until exactly four hours before sunrise.

Retrieved from "https://sonicfanon.fandom.com/wiki/Rose_Hellsing?oldid=1747838"
Community content is available under CC-BY-SA unless otherwise noted.