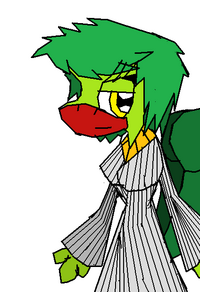 Rosadiya is a strong and wise treecko .Despite being wise she sometimes goes through difficult times and is not very good with the social aspects of her job.She's kind and caring,but still can get mildly angry when provoked.In times when she's down she's mostly seen in Marco's Diner,drinking.Rosadiya sometimes flirts with men before remembering she has a husband.

Rosadiya says she suffers amnesia and doesn't remember anything but fighting with her father and her imense hatred towards her father.She made friends with a sheep named Hilda and the two had plans for rebuilding a kingdom,named the Thief Kingdom,that Rosadiya's father destroyed during a war.The two eventually completed construction on the Kingdom(Though it looked more like a town) and both were to be rulers of this kingdom.The Kingdom,however,got the attention of Mobian Pokemon who saught refuge from being caught by Overlanders and other Mobians.As well as Mobian Pokemon,it brought other weird creatures such as hybrids and mythical creatures.Eventually Rosadiya became a speaker for the kingdom and runs the militia in it.She also meet a Giratina named Azrael there and the Giratina became smitten Rosadiya's wise and strong personality,As well,Rosadiya became attracted to Azrael's quirky nature.The two went on a bunch of dates and the both ended up getting married.One day the two would get their considered daughter,Katelyn,from two confused Snorlaxes.Rosadiya currently resides in the Thief Kingdom training the militia.

Retrieved from "https://sonicfanon.fandom.com/wiki/Rosadiya_the_Treecko?oldid=1515193"
Community content is available under CC-BY-SA unless otherwise noted.